Irish crafts are having a moment in Venice

In the ‘Homo Faber’ show’s Best of Europe section, Ireland is better represented, given its size, than any other country 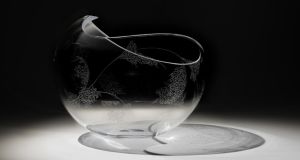 In our age of mass production and perfect manufactured replicas, does making things by hand matter any more? Exploring Homo Faber, a huge exhibition dedicated to the crafted object, on the island of San Giorgio Maggiore in Venice, certain thoughts take hold. One is that when something has been made by hand it seems to have an extra power of attraction. The other is that the Irish are very, very good at it.

These are shown beside makers from almost every country in Europe. To begin with, it’s fascinating to see if there are cultural differences in making. It’s true the Italians seem to love delicate, and also frequently over-the-top glass, and that’s hardly surprising, given the workshops of Murano and Burano are near neighbours in Venice. On the other hand, making ceramics look like intriguing sea creatures turns out to be common to Germany, Luxembourg and Denmark, as well as Ireland.

Quality of the work

Part of this will naturally be the taste of the curator, Jean Blanchaert. Another eye could have selected an entirely different 300 objects. Blanchaert says he was surprised at the quality of the work in Ireland. He is also quick to credit the president of the World Craft Council Europe, Irishwoman Louise Allen, with sharing her local and international networks. Immediately nailing down an often thorny art / craft distinction, Blanchaert says his object was to find: “craft being so good that the work is a piece of art, and artists making a piece of work with skills”.

What about the presence, or absence of national characteristics? “Surprisingly, many items are similar,” he says in his charmingly accented English. “If craft would have a language, like music, you can tell when a music is from Russia or from Ireland, but there is also something in common, a thread. Ireland,” he continues, “has a characteristic of bringing its works a flavour of the past, a flavour of poetry, a flavour of music, but exceptionally interpreted today.”

Basket maker Joe Hogan agrees with that idea of using any connection to tradition in order to take flight. Currently working on a huge commission for the prestigious Loewe Craft Prize, woven pods that will feature in its upcoming fashion show, he says some Irish work has “a certain closeness to nature. In general it wouldn’t be as easy to say this is Irish, or typically Irish. Things might be moored in tradition, but it’s drifted from the moorings a little.” Another quality he notes is subtlety. “There isn’t a brashness in Irish work, it doesn’t need to shout.”

Homo Faber is the brainchild of Johann Rupert, chairman of the Richemont Group, which owns luxury brands including Cartier, Piaget and Montblanc; and Franco Cologni, former chairman of Cartier International. Together, the pair set up the Michelangelo Foundation, with the mission to celebrate and preserve master craftsmanship and strengthen its connection to the world of design. In the Discovery and Rediscovery section of the exhibition, you can wander through mini-workshops and see Montblanc crafting golden pen nibs, Smythson stitching book bindings, and Cartier cutting exquisite gemstones. It’s hard not to also see a very strong connection to the world of luxury goods.

In the Hermes workshop, a hand-stitched saddle will cost from €70,000. Running my fingers over the admittedly admirable leather, I’m tempted to think of Berney Bros in Co Kildare, where a hand-stitched saddle, made by the fifth generation of master craftsmen, and taking 25 five hours from start to finish, will set you back just €950. I begin to wonder how much of Homo Faber is designed to advocate for the extraordinary prices of some luxury brands.

This may be a theme, but in the Singular Talents section, a series of short films wash away any bitter aftertaste the super rich might leave. The films delve into the lives of the makers themselves. Ingunn Undrum and Sarah Sjøgren hand-make ropes for sailboats in Norway, “I love the thought that this job was done exactly the same, so many years ago,” says Undrum. Konstantions Vogiatzakis fashions donkey saddles from scorched wood and felt in Greece. His satisfaction comes from seeing a donkey carrying a load as if it was of no burden to it at all. These are people who do what they love, because they love to do it, and that too is what singles craft out from the mass-produced object.

Alongside the Irish makers, there is a team of ambassadors, selected from craft schools across Europe, and once again, the largest contingent from any single school comes from the Design and Craft Council’s ceramics and goldsmithing courses in Ireland. The ambassadors are there to mediate the exhibitions, and it’s an exceptional opportunity, as Deirdre Murphy from Galway says, not only to meet the curators and buyers from around the world, but also to create a new network of makers for the future.

“It’s really important that there is such a strong Irish representation,” agrees Karen Hennessy, chief executive of the DCCOI, underlining the vital access to a global network. “Ireland is incredibly supportive of its makers, but we need other networks to support them too.” She also points out the concurrent Venice Architecture Biennale, which this year is curated by Irishwomen Shelley McNamara and Yvonne Farrell of Grafton Architects. There is a great deal to be proud of right now.

Opening the exhibition, Rupert outlined the wider need to celebrate making. Some of us, he said, predicted the financial crisis in 2008. “The next problem that we are going to have is AI combined with robotics [ . . .] So more people will lose their jobs and there will be more social conflict.” Speaking about the swing to the right in world politics, he made the point that making by hand involves thinking for yourself, not becoming part of the mind-set of the machine.

Looked at that way, craft matters, even if it is also put in service of amplifying the value of luxury brands. The aura of attraction is the aura of the skill, love, time, care and attention the maker imparted – values that are increasingly important today. Homo Faber is huge. It encompasses fashion, interiors, cars and bicycles, fine-art restoration and intriguing artisan/designer collaborations. At the very end of the island sits the Eilean, a Scottish-built yacht from 1936. Painstakingly restored, it is a marvellous vessel. But the thing that fascinated me most? It was the yacht where, in 1982, Duran Duran filmed the video for Her Name is Rio. Sometimes the aura of attraction can be as simple as the spice of nostalgia.

Homo Faber runs until September 30th. It is set to be a biannual event, with the next edition in 2020. homofaberevent.com

What sold for €540k-ish in south Dublin, north Wicklow and Cork city
8