The scrum is on to find student accommodation - digs anyone?

For every empty nester looking to make some extra cash, there’s a student who could do with the room 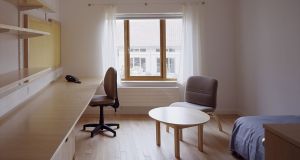 The humble digs system has for years been an Irish institution.

Students have long had an unfortunate reputation. Depending on whom you ask, they’re a Pot Noodle and a Judge Judy episode away from becoming slightly feral. Certainly, as a student living in on-campus residences in the ‘90s, I wasn’t entirely without sin. Keeping things tidy came a distant third after partying and the occasional lecture. It was my first taste of freedom, and I didn’t want it tempered by Domestos and Mr. Muscle. I considered it a privilege to blare RTE’s No Disco at midnight and then rise at 11am; both would have been verboten at home. Little wonder, then, that in the totem pole of renters, students have languished at the bottom for decades.

The humble digs system has for years been an Irish institution. Homeowners would rent out a room to students on Monday to Friday, with the unspoken agreement often in place that they would return to their home county on the weekends. The cooking was basic, the room doubly so, but digs were preferable to a commute from the arse end of nowhere. Yet the idea of digs fell somewhat out of fashion down the years, on the part of student and homeowner alike. A landlady, willing though she might have been to cook and clean, was a less attractive option to independent living for those straining to be let off the leash. Who wanted, after all, to trade in one parental figure for another? You’re much more likely to get sexual tensions, dubious hygiene and kindred souls on campus or in houseshares.

It cuts both ways. For those with spare rooms, the unforgiving headlines about students and the Insta generation in general – not to mention more recent factors like the advent of cash cows like Airbnb – have put the kibosh on students as a renting option. And those going into third level are feeling the pinch accordingly.

And as the steeplechase for college places starts, the scrum is also on to find student accommodation. The Union of Students in Ireland is sounding the annual alarm bell over lack of student beds but the figures are stark - 80,877 people have applied for college places this year and while many city students can stay at home for the duration, there’s a huge number facing stiff rents - if they can find somewhere in the first place. In Cork, for instance, Daft.ie, had 87 properties available to rent on August 1st, 1000 fewer than on the same day six years ago.

So far, so depressing. Yet could it be, however, that the solution is sitting under our noses, and has been this whole time? How many empty nesters are living in college-adjacent suburbs like Drumcondra, Deansgrange, Booterstown or Celbridge, and could do not just with a €12,000 tax-free cash injection… but some young, spirited company to boot?

Marie Reidy in Celbridge recently waved her youngest child, aged 24, off into the big bad world, and has welcomed two NUI Maynooth students into her home for three years.

“The number one reason was financial, but I didn’t want a houseshare situation,” she explains. “They’re gone in the summer, and if they’re Irish they’re gone on the weekends.”

Often, the students find digs at the behest of their parents: “90% of the time the parents will ring about the house,” she says. “It’s rarely the kids that make the initial call.”

Still, her affection for her charges is palpable.

For Marie, a balance should (and can) be struck between offering support and allowing youngsters to become independent. “I never let them eat by themselves,” she notes. And here is where, perhaps, the idea of digs can really come into its own. It’s quite something to think of empty nesters, feeling slightly cut of from the cut and thrust of 21st century living, breaking bread with someone from the Facebook generation. The benefits seem bountiful: not just for companionship, but connectivity. I’m already imagining a wealth of gap-bridging scenarios where landlord and student explain to each other the likes of Snapchat and twerking, or the making of a shepherd’s pie or hospital corner. Quite apart from connectivity and companionship, digs are a boon for students, too: they get to enjoy the balm of family life.

Renting to students has rarely been the preserve of younger homeowners, and maybe it should be.

Lisa Cronin recently decided to become a fashion designer. In a bid to boost funds, she started down the conventional flatshare route and rented a room to a professional in her Grand Canal Dock apartment through Daft.ie.

“It was a disaster from the get-go,” she recalls. “Problem after problem arose.”

Lisa then came across a site called HostingPower.ie. Much like Airbnb, students book rooms and landlords consent using the site’s screening process. The closer one is to a university, the more money they can command. Lisa had long grown up in a house where her parents rented to students, so it felt like a comfortable option. So far, she has rented to three students.

“I find this so much easier, and students are rarely around,” she says. “Going through an agency like this, you have their details. If problems arise they can be moved on. You can totally pick and choose who you might like to rent to.”

So far, there have been no problems. “If the student wants to bring someone over they have to contact you first,” explains Lisa. “The boundaries are already set in stone.”

Kicking into touch a housing shortage aside, digs might just be the intergenerational bridge that some people need. We’ve done away with the idea of the student in digs as a homesick greenhorn, and his landlady a forbidding battleaxe. For homeowners looking to make some extra cash, what better way to discover the realities of millennials than to live with them?

And, says Lisa, today’s digs system might just have unexpected fringe benefits: “A friend of my mother’s rents to a group of Brazilian students, and the deal is that each of them cooks a meal for the house every night. She hasn’t had to do a dinner in months.”