The influence of Japan on our design culture is deep and pervasive, so what is it that has so enraptured some of our most creative artists and makers? 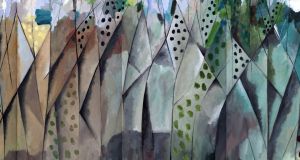 Honed down to essentials: ‘Woods’ by Ed Miliano, who says the ideas behind Japanese design are as much about living as they are about making

Painstaking, time consuming, spiritual? Splashy flashy Manga mixtures? Big eyed Anime? And what about schoolgirl kitsch? Japan is an enigma, but a highly persuasive one. For a country that was closed to foreigners for more than 200 years, the influence of Japan on our design culture is deep and pervasive. So what is it that has so enraptured some of our most creative artists and makers?

Artist Ed Miliano, whose exhibition Woods is currently at the Oliver Sears Gallery (oliversearsgallery.com), found the culture shock of Japan so intense, initially he stepped back a little. “I wanted to be able to absorb it more slowly; it’s seeping in all the time.”

Married to Ireland’s ambassador to Japan, Anne Barrington, Miliano has had plenty of time to come to terms with what it is that makes Japanese culture tick. From small details – different sets of proportions, different standard sizes, the use of gold leaf, ways of framing a landscape – to larger, more philosophical differences, the ideas behind Japanese design are as much about living as they are about making.

Miliano describes the Shinto way of rebuilding shrines, exactly the same, every 60 years. “It’s so the generations don’t forget how to do it and it’s about the continuation of a craft and a striving for excellence. Shintoism is in everything, not necessarily religiously, but in the aesthetics of the way they live. They hone things down to the essentials.”

A hugely pervasive principle of Japanese design is the concept of Wabi-Sabi, which, in its most reductive form, is about the idea of beauty in transience and imperfection. A gnarled branch of delicate cherry blossom is a good example of Wabi- Sabi. Another important condition is time.

Joseph Walsh (josephwalshstudio. com), who will be exhibiting his furniture work in Tokyo next year and who employs Japanese makers in his studios in Co Cork, describes the impact of Japanese thinking.

Like Miliano, he was resistant to changing his own sensibility and ways of making, but instead found a deeper connection with the thinking behind the making.

Reality of the object “It will strike you when you’re having a conversation with a craftsman, who may be the sixth generation of a family of tea-caddy makers. You’ll realise that it’s not the object but the reality the object creates, and that the owner can connect to, that matters.” The time and effort put into making a piece continues in the minds of the people who then own and cherish that piece.

For Walsh, it boils down to learning to have fewer objects and, consequently, to value those objects more greatly. The idea of time embodied in an object also struck writer Rudyard Kipling visiting the cloisonn workshop of Namikawa Yasuyuki, more than 100 years ago.

“I saw a man who had only been a month over the polishing of one little vase five inches high. When I am in America he will be polishing it still, and the ruby-coloured dragon that romped on a field of lazuli, each tiny scale and whisker a separate compartment of enamel, will be growing more lovely.” 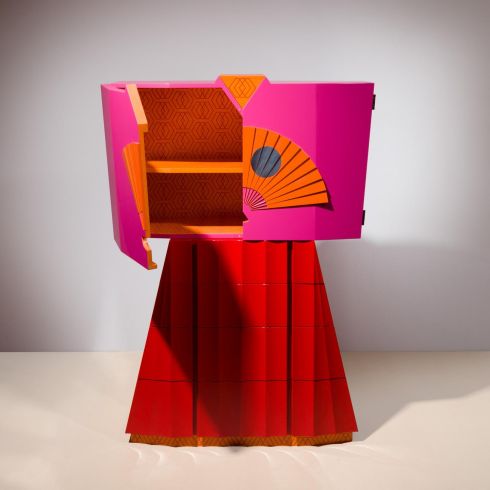 Whether it is spiritual or visual, the influence of Japanese design runs so deep that you can find yourself looking at several generations of artists responding to other artists, who have in turn been beguiled by Japan. An architect who picks up on the room arrangements and the marriage of interior and exterior spaces in the work of Frank Lloyd Wright; a furniture maker looking to Charles Rennie Mackintosh or any of the arts and crafts movement makers; any artist informed by Impressionism or beguiled by Gustav Klimt – they’re all in debt to Japan.

New aesthetics For many, the new aesthetics that emerged following the opening up of Japan to trade in 1853; the complete break with traditional ways of looking and representation, proved mesmerising. Add the whiff of the exotic – frequently discovered in wood-block print and tenegui fabric wrappings around other objects newly exported from Japan, and you have a potent mix.

Another moment came with the inclusion of Japan in the Paris Exposition Universelle in 1900, an event that was attended by highly influential Irish designer and architect Eileen Gray. According to Jennifer Goff, curator of the Eileen Gray collection at the National Museum of Ireland, Gray was hooked. “She became fascinated by Japan and Japanese lacquer.”

In 1907, she met her mentor, Seizo Sugawara, “a young Japanese student in his 20s”. Gray plunged into a medium that was unconventional . . . she ended up working with a number of Japanese craftsmen throughout her career.

Japanese influence Goff traces the Japanese influence to many of Ireland’s contemporary furniture designers, “notably in the work of Corkman Joseph Walsh; Zelouf + Bell, especially in their Koi table series; the textured cabinets of John Lee, and also in the woodturning work of Emmet Kane.”

Kane himself made a homage to Eileen Gray, E.7.E.11, 2015, is a delicate ebonised oak vessel, its interior rich with 40 coats of perfect red lacquer. Another Kane piece, P.S. 2014, 2015 is a large wooden disc with a gold centre, dedicated to artist Patrick Scott, himself hugely influenced by Japan – and so it goes on.

Susan Zelouf of design duo Zelouf + Bell (zeloufandbell.com) finds Japanese comparisons with their work “unsubtle”, but agrees that one “overarching ethos of Japanese design that does influence us is where the organic meets fine craftsmanship”.

Nevertheless, pieces such as their funky Kimono and Koi Pond cabinets are definitely indebted in many ways to Japan, alongside the team’s trademark irreverent touch.

Lacquer may be lustrous, but Japanese ceramics have a grittier charm, which has captivated Irish makers, including Waterford-based potter Marcus O’Mahony (marcusomahony.com).

“Pottery in Japan is on another level,” he says, “seen and used everywhere. People ask not which pots do you like, but which pots move you.”

Visiting artist O’Mahony will be a visiting artist at the International Woodfire Workshop in Japan later this year. It is Wabi-Sabi, that embracing of imperfections and fragility, that has moved him to build his own Anagama woodfire kiln in Ireland.

“It’s very low-tech but capable of reaching the intense heat of 1300 Celsius, fired over a period of 50 hours. The kiln atmosphere, velocity of the flame and melt of the fly ash all impact on the work.” Japanese ceramics, he says, “have soul and integrity”.

This idea returns to Walsh’s notion of an object that is valuable for the ideas and beliefs it contains, a sensibility that is very rich in Japanese culture. It is no wonder Irish artists and collectors are hooked.

Line and lacquer: more Irish makers with a Japanese twist

Peter Fulop: potter working with Raku and woodfiring, together with gestures inspired by calligraphy. peterfulop.squarespace. com

Cóilín Ó Dubhghaill: this silversmith studied in Tokyo and is fascinated by form, making work inspired by ritual. coilin. com

Helen O’Connell: stonework includes the delicately edged limestone Origami Vessel. oconnellsculpture. com Go back to the source See collections of decorative arts from Japan through the ages at the Chester Beatty Library, Dublin (cbl.ie) and at the National Museum, whose holdings include the Albert Bender collection of Asian art, on display at Collins Barracks. There you can also see exhibitions of the work of Eileen Gray and Emmet Kane (museum.ie).