The Cork house that time forgot

Lotabeg House in Cork has been virtually untouched since 1939. The people of Cork now have a chance to look beyond Callaghan’s Gate as the contents of the house are to be auctioned by Mealy's. Video: Enda O'Dowd 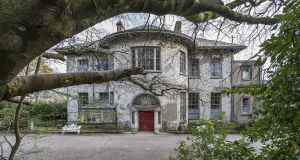 The front exterior of Lotabeg 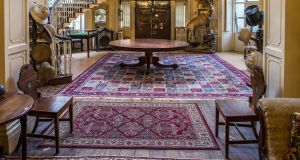 The front hall of the Georgian house in Cork 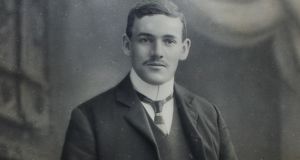 Vincent Hart, whose father bought the house in the late 19th century. Hart died in 1939 and Lotabeg has been virtually untouched since then 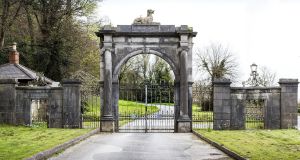 Callaghan’s Gate, the iconic stone arch at the entrance to the long and winding drive that leads to the house 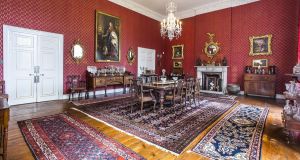 The dining room at Lotabeg 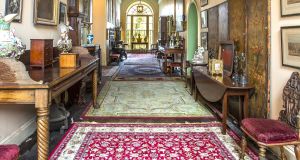 In 1903, Vincent Hart a 22-year-old newly qualified engineer from Cork went out to India to serve the British Empire. He returned more than 30 years later – in 1936 – to an Ireland that had changed utterly. The country he had left was no longer under British rule and Cork, once a “loyal” city, was now the second city of the Irish Free State. Hart hung up his pith helmet on a hat stand in the hallway of his family home, Lotabeg. It’s still there.

Hart died in 1939 and the house has been virtually untouched since then. Now the contents are to be sold – on the premises – by his descendants in a major auction hosted by Mealy’s on Tuesday, May 24th. It’s the most interesting house contents sale in Ireland since the spectacular auction of the contents of Mount Congreve in Co Waterford four years ago and it is likely to attract a huge crowd to the three days of viewing beginning next Saturday, May 21st.

Auctioneers are rarely stuck for words – and are prone to purple prose – but George Gerard Mealy said he was “awe-struck” when he first visited Lotabeg and described it as “a time capsule spanning from the 1830s to the 1940s”.

The entrance to the house – on the busy Lower Glanmire Rd on the Tivoli edge of Cork city and close to the M8 Cork/Dublin motorway, is a familiar sight to thousands of motorists daily. But few people have ever passed beneath the ionic stone arch surmounted with a stone-carved Irish wolfhound. Known locally as Callaghan’s Gate, it was built by a previous 19th century owner of Lotabeg, Daniel Callaghan MP, who reputedly commissioned the arch to commemorate a hound that saved him from drowning in the nearby river Lee.

The Georgian house itself is hidden from view, up a long and winding drive, and is surrounded by trees and gardens – now gone wild. The elevated site affords tantalising views over the city, port and river. Next week’s viewing will be the first time that Lotabeg has been accessible to the general public in its 200-year history and will finally enable people from Cork – and further afield – to see what lies beyond Callaghan’s Gate. The house was acquired in the late 19th century by Hart’s father John S Hart, manager of Queen’s Old Castle – a famous and prestigious department store in Cork’s Grand Parade – long since closed. And Lotabeg was a classic residence for a member of the Cork “merchant prince” class.

The family assembled a collection of paintings, furniture, silver, rare books, porcelain, carpets, chandeliers, taxidermy and items of Indian and Asian art brought home from their travels. All the contents are going under the hammer in a sale expected to realise up to €1 million.

This was not a “big house” of the Anglo-Irish aristocracy – but, instead, the home of prosperous, middle-class Cork Catholics during the final decades of British rule in Ireland. The contents and decor are still intact – as if frozen in time – and the auction provides a unique, once-in-a-lifetime and absolutely not-to-be-missed opportunity to view this extraordinary tableau vivant before it disappears forever.

Getting to the viewing – next Saturday, Sunday and Monday (May 21st, 22nd and 23rd) – will require some forward planning. Parking at Lotabeg is severely restricted and there will be no direct access for private vehicles at the Callaghan’s Gate entrance on Lower Glanmire Road. Entry to the viewing and the auction itself will be by catalogue only (€20, admits two adults), available to purchase at the nearby Clayton Silver Springs Hotel where “ample parking is available and from where a return shuttle bus will bring viewers to and from the house”. Further details are available at mealys.ie.

Stepping into the house is like being transported back to the 1930s. The magnificent, domed hallway is dominated by a sweeping cantilever staircase and is filled with antique furniture, taxidermy, classical prints, paintings, chandeliers, rugs and clocks. Hat stands are filled with sun-weathered pith helmets, silk top hats from swanky Patrick Street shops of long ago and peaked officers’ caps. Among the more startling taxidermy lots is a life-size stuffed and mounted mountain goat estimated at €4,000-€6,000.

Hart was educated at the Presentation Brothers College – a fee-paying Catholic school in Cork and then at the Royal College of Engineering in London.

He was one of many young Irish men who served the British Raj – the era of colonial rule in the Indian sub-continent.

He joined the India public works department in Madras – a city today known as Chennai – and eventually became the chief engineer. He oversaw the construction of the Mettur dam over the river Cauvery – the largest dam in the British empire. Some 17,000 men were employed in its construction and it took three years to build.

He brought back many mementoes of his decades in India – now on view for the first time and for sale. Among them is a magnificent three-volume album of 92 “extremely rare and important” photographs of Victorian India by the renowned photographers Samuel Bourne, Charles Shepherd and Arthur Robertson (estimated at €6,000-€10,000) with subjects including “Our Shooting Party of 1864” and a “Group of Thugs”.

A separate photograph album entitled “A Souvenir of the Visit to Jeypore Samasthanam of His Excellency the Right Hon’ble Viscount Goschen of Hawkhurst, Governor of Madras and The Viscountess Goschen, 14th December 1927” contains a handwritten inscription by the Maharajah of Jeypore who gifted it to Hart (estimate €1,000-€1,500).

Two albums of photographs taken in Peking during the 1911/1912 Chinese Revolution, depicting extremely graphic and disturbing imagery of the brutality in the streets but also images of Europeans playing polo and attending a race meeting in Peking are likely to attract interest from Chinese bidders (€800-€1,200).

Leather suitcases and steamer trunks – some with labels still attached – that both brothers used, are also in the sale. But the various mementoes of colonial life are just the tip of the iceberg.

Following the contents auction, it is expected that Lotabeg house will be separately offered for sale by private treaty through estate agent Andrew Nolan of Goffs Property in Co Kildare.