Sort it: Poor ventilation can have serious health consequences

There is too much hot air in our energy-efficient homes 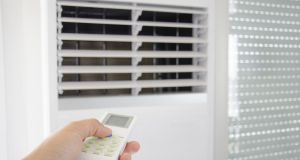 Take control: with improvements in airtightness, the importance of ventilation often gets overlooked

Houses in this country are getting better. Most of us still probably come from a generation where our net curtains used to dance in front of the window, and that was with the windows closed. Drafts in living spaces are not tolerated by occupants any more and most building codes, worldwide, now require airtight building envelopes.

But with these improvements in airtightness, the importance of ventilation often gets overlooked. In our old drafty houses, supposedly about 60 per cent of our required air circulation came from areas we didn’t know about; but in highly efficient, airtight homes, reliance on incidental air leakage through leaky walls and windows no longer provides a safety net.

So what is the importance of ventilation? Well, poor ventilation can have serious consequences. It can make our homes “sick”, with condensation and mould damaging the walls and fabric of our houses. But, more importantly, it can make the occupants sick.

High humidity levels can affect allergies and complicate respiratory diseases brought on by certain biological agents such as mites and mildew. Mould, mildew and mites all thrive in environments that are high in humidity. We all know how deadly certain moulds can be. Black mould can be incredibly damaging to almost all human functions, affecting the respiratory system, circulation, mental faculties and more.

Worse again, high levels of relative humidity affects the concentration of volatile organic compounds in the home and prolonged exposure to these compound leads to terrible health conditions such as eczema, nervous system damage and cancer. So we do need ventilation, and good ventilation. Better air quality means a healthier environment.

A client recently asked me, after we had finished dry lining her walls, and after she had been watching an episode of Room To Improve where a sprawling web of fungus had been lurking behind the dry lining, if that was going to happen to her walls?

If the dry lining is not sufficiently airtight, and the ventilation is inadequate in the room, then moist room air can penetrate on to the colder wall behind, condense and create the breeding ground for such an event. With internal dry lining, a vapour barrier to prevent this interstitial condensation on the wall behind will help prevent it.

In a study carried out in the UK, it was found that in newly built houses that were compliant in terms of insulation and airtightness, the required air flow rates through passive venting (holes in the wall) were not being met.

Simon Jones, chair of the Irish ventilation industry association, says: “We are falling well short of meeting standards when it comes to achieving desired flow rates. Even our attitude to ventilation must change.” One finding from the UK study showed that of the houses tested, 37 per cent of them had 0 to 20 per cent of their vents open/working. This is down to people covering vents up or switching off a noisy mechanical vent – a crime many of us are guilty of.

What’s the point in going to the expense of having an airtight home if we then have to go putting holes in each room to ventilate it? Again it all comes back to energy efficiency. If your house is airtight, then you are in control of air leakage; and there are some simple but smart ventilation options available.

Demand controlled ventilation (DCV) is a simple set-up whereby the room vents come with humidity and carbon dioxide sensors. So if, for example, someone in the house has just taken a shower, has boiled the kettle, or if you are drying clothes in the spare room, and there is increased humidity in the air, the vents will sense this and open to allow the air to turn around to get it back to the desired quality. Likewise with the carbon dioxide sensor: if there are a lot of people in the house, the vent will open to allow quicker air change. And when air conditions in the house are perfect, like at many hours during the day, the vents will close up to the correct amount, so that you are limiting the heat loss from your house. Simple but clever.

The cost about €2,000 to €2,500 to supply and fit in a standard three-bed house, according to Greenoak energy, they are just as easily retrofitted too, and according to the Sustainable Energy Authority of Ireland, will pay back in time.

Heat recovery ventilation is a step up again, where the warm air that is being extracted from the house is used to heat up the fresh air coming in. This type of system will probably set you back €4,000 to €5,000, twice the price of the demand controlled ventilation option, but it will also perform more efficiently. According to Simon Jones, an optimum performing DCV system can be 84 per cent as efficient as a heat recovery system.