Where to stay, rent or buy down Dingle Way

A summer series on holiday destinations 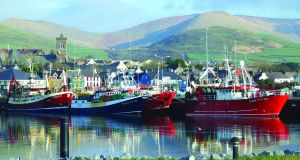 A view of Dingle from the water.

It was the 1970 film Ryan’s Daughter that put the Dingle peninsula on the modern tourist map bringing scores of Americans to see the big sky vistas, virgin beaches and an Ireland that had been relegated to the past. Former taoiseach Charles Haughey also helped glamorise this part of Co Kerry and in the mid-1980s when Fungi the dolphin first appeared it brought a whole new generation to the Kerry coastline. Star Wars is beaming the scenery into cinemas the world over, introducing the place to a whole new generation of fans.

But is it Dingle or Daingean Uí Chúis? These days most people claim to be agnostic; the emphasis instead is on its Gaeltacht, gorgeous scenery, fantastic food and heritage, combining to make Dingle one of the country’s premier holiday hotspots.

“Tourism in Dingle is a bit like those desert flowers that for much of the year remain dormant and them bloom into extravagant colours for a short while before disappearing again,” is how local Lorcan O’Cinnéide, national secretary of the Irish Fish Processors and Exporters Association, puts it.

In winter the town’s population is about 2,000 souls with this number increases to 6,000 or 7,000 per night during July and August, meaning that it can take 20-30 minutes to get through the town. Some of the visitors are just day-trippers with scores of buses disgorging 3,000-4,000 a day to see the peninsula’s sights, many coming north from Killarney to tick it off their Irish bucket list.

In rural Ireland terms, Dingle is a bit of an anomaly. It is a pretty, cosmopolitan little place that hosts several off-peak festivals that help extend the traditional vacation season starting with a film festival in March, a food event in early October and December draws what one local describes as “long, lanky New York types” rocking into Supervalu, in town, for the very special music festival, Other Voices.

Many Americans, seduced by the celluloid portrait, have bought holiday homes here and return for one to two months in the summer. This has pushed house prices and rentals up and, in some cases, out of the reach of locals.

There are many locals who believe the town simply didn’t need the publicity of the Wild Atlantic Way, that tourism was already at a tipping point but what this marketing strategy has attracted is activity tourists, walkers and kayakers, mainly continentals, looking for a completely different experience.

Every county in Ireland comes to Kerry to discover Dingle so much so that certain townlands and villages outside the town attract certain county crowds. In Ventry, to the west of Dingle, you can expect to bump into well-heeled Dublin barristers and other legal eagles while a gang from Limerick have set up their very own ecosystem in Baile na nGall, about 10km north of the town, where there are just two pubs and a post office. In all you can expect 10,000-12,000 visitors on the peninsula on any given night of the summer, says Caroline Boland, a marketing and tourism executive with Dingle Peninsula Tourism Alliance.

If you want to stay in town to be within walking distance of the pubs and their music scenes, then John Benny’s apartments offer a central setting that is still sequestered off the main drag. For an upscale B&B experience, try Dingle Garden Townhouse where there are four en-suite rooms and whose garden backs onto the Díseart chapel and grounds whose famous Harry Clarke windows overlook the bottom of the garden.

Boutique self-catering outfit Stay YNA (stayyna.com) offers access to some of the best holiday rentals in the region. Set up by Amanda and Simon Walker in Nice on France’s Cote d’Azure, it also features properties on the hedonistic island of Ibiza as well as Killarney and Dingle and now operates some 45 rentals, all offering luxurious furniture, hotel-level bed linen with nary a single stick of yellowing pine furniture, on this Atlantic outpost.

“You will need to be booking next year’s vacation now to even get in the door and can expect to pay from €800 for a three-bedroom property to €2,500 for a five-bedroom property with a massive garden and sea views,” says Dingle-based director Clodagh Edwards whose office is situated on John Street.

Also at the top end is Atlantic Bay Rest (atlanticbayrest.com), a big historical bungalow with stunning sea views in Ballyferriter that sleeps 10. It costs €1,000 per week. If you rent the summerhouse as well – it sleeps another five – the total is €1,500 per week and includes the use of a boat and slipway.

For a more standard three-bed rental, you can expect to pay from €650 per week, Boland says. There may be more affordable options east of Dingle and at the foot of Mount Brandon, where the sea views are more distant, says one local.

A trip to the Great Blasket is an essential part of the experience. With no electricity on the island, Alice Hayes and Billy O’Connor offer an authentic stay that includes dining by candlelight, cooking on a full gas hob and solid fuel stoves. There is still some availability on the three houses they have to rent. One sleeps six and costs €240 per night, the other sleeps 11 and costs €390 per night.

Peak season is the last week in July and the first week in August when generations of emigrants return home for the races.

In Dingle town a three-bedroom semi, 1,350sq ft in size, on Chapel Lane, within walking distance of the town’s amenities, is asking €230,000 through agents JD Property. Many properties for sale in this part of the world are in need of some modernisation. Take Ceathru Ferriters Quarter, for example. The three-bedroom cottage, built of native stone, has a separate artist studio and is set on 0.7acres at Dunquin on the western tip of the penninsula with views of Mount Eagle and the Blaskets. It is asking €350,000 through the same agent.

You can pile on the pounds in this part of the world for Dingle is one of the country’s top foodie towns. Bean is a trendy coffee shop that has changed the drinking habits of the natives from a pot of tea to single estate brews. Palate-tempting picnic bites can be found at The Little Cheese Shop, which is run by Swiss-trained cheese-maker Maja Binder. It’s a tiny church where you can worship its extensive stinky cheese selection and it also sells local pickled sea vegetables and seafood by On The Wild Side’s Olivier Beaujouan and freshly baked breads from craft baker Bácús Bhréanainn.

Get the kids to try a scoop of sea salt ice-cream from Murphy’s on Strand Street. Made from seawater collected to harvest the salt, this now national brand started making ice-cream in the back of the shop here in 2000.

Any day now locals expect the slate-fronted restaurant Idás to win a Michelin star. Art-school owner chef Kevin Murphy presents local and foraged produce that looks good enough to frame or at least Instagram. For something more low key, try The Blue Zone jazz and pizza wine bar, upstairs from Dingle Record Shop, which just might sell the best pizzas in Ireland, claims O’Cinnéide. And if you’re self-catering and don’t feel like cooking, then head to Reel Dingle Fish where you can order outstanding fish and chips from a daily menu that includes cod, calamari and hake.

The gallery to visit

The Greenlane Gallery sells a selection of prints and sketches and oils by local artists. Visit Sicilian stone mason Antonio Fatzio’s studio in an old forge, a couple of miles from the town, and potter Louis Mulcahy’s studio and cafe, about halfway between Ballyferriter and Dunquin.

The Dingle Way offers tracts of wilderness to explore. Framed by ever-changing seascapes, thousands of walkers explore it on foot overnighting at B&Bs. Stand-out spots include O’Connor’s in Cloughane, a pub with accommodation, Tom Crean’s The South Pole Inn in Annascaul and nearby The Old Anchor Inn where you can lay your head.

Dingle is a fishing town and Dingle Bay Charters will take you out to the big blue where, if you’re lucky, you might spy some basking sharks, a minke whale and some of Fungi’s extended family. And at John Benny’s pub the chef will gut and fry up any fish you catch and serve it to you with some fries for about €10 a head.

The Mighty Session, O’Flaherty’s and O’Sullivan’s Court House are all good music pubs but for a late-night bar where golfers on holiday can shake their booty with hen parties and locals it has to be An Droichead Beag where all human life ends up on its tiny dance floor. Prefix your chat-up lines with a slow sounding “wellll” with a long emphasis on the ls to sound like a local.

Your drinks trolley will love a bottle of Dingle single malt whiskey, Dingle Original gin, a dry and small batch produced alcohol or the quadruple distilled vodka all from Dingle distillery.