Number 46 Iona Road has been empty a decade, but has all period features intact 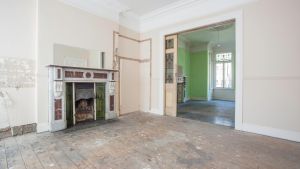 Iona Road is home to some beautiful homes many of which were Strain-built and once subdivided into flats and bedsits but are now returned to family homes.

Number 46, situated at the Glasnevin end of the road that connects it to Drumcondra, is a rare breed – a house that hasn’t been touched by the flatland era when crimes against period buildings were commonplace.

It is almost in original condition – one almost expects to hear the swishing of a taffeta bustle as you walk through the front door.

The house has a Tudor-topped box bay window to the front, granite lintels and decorative brickwork over the front door arch.

The front door has leaded glass panels and opens into a hall where ceiling heights are about 10ft. The floorboards are in good condition. The rooms have high ceilings, about 10ft at hall level, ornate coving, lead glass windows, picture rails, and marble and cast-iron fireplaces throughout.

In the interconnecting reception rooms there is a pair of matching marble fireplaces, shallow alcoves and a broken set of leaded glass sliding doors dividing the rooms. The missing door leans against a wall awaiting reinstatement. The bay window to the front has arts and crafts leaded panels and the pattern is echoed in the box bay window to the rear that washes what traditionally would have been a formal dining room in light.

The return comprises a breakfast room and leads through to a bathroom. Internal walls here could be knocked to open this space to the south-facing garden, which is 90ft long and home to a couple of apple trees. There is scope to extend out to the side too but any interference with the wide bay window in the dining room will spoil the reception room’s perfect symmetry. Moran says you could expect to pay about €1,700 per square metre for such an extension.

Depending on how you would like to configure it, the property has four or possibly five bedrooms. There is a room on the return with a separate family bathroom and small shower room also at this level.

There are three good-sized doubles on the first floor. You could turn one into a day-lit ensuite and dressing room if you decided to install the master bedroom to the front of the house. A second option is to put the master on the second floor where the vaulted room is dual aspect and where there is already a small shower room and a second room, lit only by a very small roof light, that could, with a bit of imaginative illumination, become a very smart, bright bathroom and dressing room.