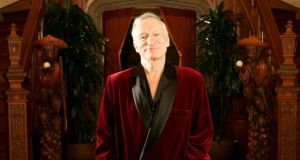 Hugh Hefner: the publisher lived in the Playboy mansion until his death, in 2017

The Irish auctioneer Martin Nolan will this week host one of the biggest house-clearance sales in Los Angeles history when the contents of Hugh Hefner’s fabled Playboy mansion go under the hammer.

The Athlone-born executive director at Julien’s Auctions has spent more than a year overseeing the decluttering of one of the California city’s premier properties. Nolan and a staff of 25 completed the monumental task of cataloguing more than 8,000 items from the Gothic Tudor property, which stretches to almost 1,400sq m (15,000sq ft) and sits on 2ha (5ac), including a four-bedroom guest house and infamous swimming pool and grotto.

It is one of the few homes in Los Angeles to have a zoo licence; Hefner loved monkeys and flamingos in particular. Playboy Enterprises sold the house for $100 million (€88.65 million) on the condition that Hefner could live out his days there. He died in September 2017.

The sale, which begins on Friday, and has no reserves, includes silk pyjamas in every colour (guiding from $2,000, or about €1,770), velvet monogrammed Dunhill slippers and silk damask smoking jackets, one in crimson red ($5,000, or about €4,450). “All are great conversation pieces,” Nolan says.

The auctioneer’s favourite lot is the publisher’s Underwood typewriter from his college days. A warranty label under the case reads Hugh M Hefner / 1303 W University Ave. It has a presale estimate of $500 (€445).

Nolan says there has been much interest from museums, universities, fans and investors. Christmas shoppers might like Hefner’s own first issue of Playboy, with Marilyn Monroe on the cover ($5,000, or about €4,450), or a 1946 jukebox, complete with 78s ($20,000, or about €17,750). Also up for grabs is a leather-bound Bible embossed with Hefner’s name, complete with a card certifying that the publisher was a minister of the American Secular Humanist Church ($400, or about €355).

Nothing from the grotto is for sale, although outdoor furniture is included.

Nolan, who has overseen auctions for Cher, Barbara Streisand and Ringo Starr, says: “Part of my job is going into homes and uncovering the valuable items we all want to see and collect.” His clients include Ripley’s Believe It or Not!, Hard Rock Cafe and the Newbridge Silverware Museum of Style Icons, in Co Kildare.

Viewing opened earlier this week; after a red-carpet event at the Playboy mansion tonight, it will continue tomorrow. The two-day sale starts at 10am on Friday. All proceeds will go to the Hugh M Hefner Foundation, which supports civil-rights causes.