A new book charts the fascinating history of the modern conservatory 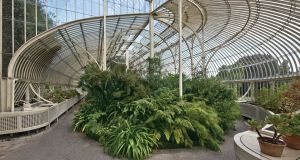 Interior of Curvilinear Range at National Botanic Gardens, Dublin. From The Conservatory: A Celebration of Architecture, Nature, and Light

The image on the cover of The Conservatory – the magnificent interior of the Palm House at Kew Gardens – is a glorious way of explaining the title and indicating what this new book is all about. And The Conservatory needs it: few structures have had their original name so misappropriated.

Nowadays “a conservatory” can mean a basic PVC-framed room newly added on the rear of a house, or a lean-to whose big window somehow earns it the title. Crucially they are seen as extra living spaces for humans, not plants.

Alan Stein and Nancy Virts’s book traces the origins of the conservatory starting in earnest from the 17th century. This is when brick-and-glass structures were built facing south in the hope of keeping alive the citrus plants brought to cooler climates by a new generation of explorers. Christopher Columbus had previously started a pineapple craze in Europe as gardeners attempted to find ways to grow the new exotic South Americanfruit.

The glory era of the conservatory was the 19th century, a time of great technological advancement and exploration when engineering, architecture, craftsmanship and horticulture came together to create vast glass cathedrals. What the authors make clear is that none of it would have happened without patronage – in Britain it was the landed aristocracy that made it possible. When, 100 years after they were built, steel conservatories in private houses needed significant renovation as their cast-iron components perished, the funds in many cases were not there and, as the book notes, many disappeared.

Identified in the lavishly illustrated book as the most important glasshouse of the 19th century is the Great Conservatory at Synon Park (1827), designed by Charles Fowler for Hugh Percy, duke of Northumberland, for his collection of exotic plants. It is regarded as a landmark in the evolution of conservatories – when the orangery, typically built of masonry with domestic-scale windows with a tiled roof, became a mostly glazed and steel structure with glass roofs.

The most striking element of Synon is the “magnificent central dome that shimmers in the light barely tethered to the earth”. The dome’s immense height was to accommodate the voguish interest in growing palm trees and giantbamboo.

Irish readers will be inclined at first passing to skip to the chapter dealing with Richard Turner, one of the great conservatory designers of the 19th century. From a family of Dublin iron workers – their foundry was in Ballsbridge – Turner worked with Decimus Burton on the Palm House at Kew, which by 1840 had become England’s official botanical garden. His engineering expertise was drawn on by Charles Lanyon for the glasshouse in the Belfast Botanic Gardens. In the 1840s he worked on the design for the undeniably magnificent Curvilinear Range of glasshouses in the National Botanic Gardens in Glasnevin.

While decay took down many magnificent glasshouses across Europe, some simply outlived their use.

The Jardin d’Hiver in Paris, built between 1846 and 1848 as an indoor entertainment complex with a ballroom, restaurants and shops, was demolished in the 1860s – though no specific reason is given here.

The Crystal Palace, the vast technological wonder built by Prince Albert in London’s Hyde Park to hold an exhibition in 1851, showcased Victorian technological advances in food, transport and clothing. Exhibits included everything from false teeth to steam engines. The exhibition closed after six month, when six million visitors had been through the doors.

The Crystal Palace itself was as much a wonder as any of its exhibits. New advances in glass blowing allowed for larger panes, while the curtain wall system, whereby glass hung from a steel skeleton, was an innovation refined over decades and still in use today. It was dismantled pane by pane and moved to the London suburbs, where it was used as a venue for concerts and events before it burned to the ground in 1936.

The book covers conservatories in the United States and Europe, among them jaw-dropping structures such as the Franklin Park Conservatory in Columbus, Ohio (1895) and others in cities including Madrid, Copenhagen and Paris.

In Milan it details how the new technology of working with glass and steel was employed not to house plants but to build a prestigious shopping mall for the burgeoning middle class. The Galleria Vittorio Emanuele was built following a public competition in 1859. Known as Milan’s drawing room, this lofty and supremely elegant structure is a tourist magnet, still home to the most expensive brands.

I suspect one detail chronicled in the book will make visitors shiver as they walk through: upon its completion in 1871, designer Giuseppe Mengoni was up on the central dome of the galleria to complete his final inspection of the glazed structure when he slipped and fell to his death.

The final chapter on modern conservatories documents some outstanding contemporary versions, from the Davies Alpine House at Kew to the Parc André Citroen Conservatory in Paris. But for all their technological advances – notably in heating systems – they don’t hold any of the romance or wonder created by the evocative cast-iron wonders of the Victorian era.

And, at a time when office workers in major cities typically work in anonymous glinting glass-walled buildings with all their shortcomings (not least the question: will any one ever go back to one again without wondering about ventilation), there is little to inspire awe about 21st-century glass houses.