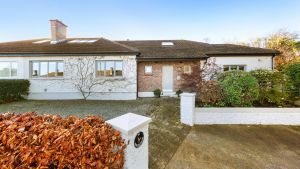 The bungalow in the Blackrock cul-de-sac at 52 Ardagh Crescent grew with the family who has lived here for nearly 30 years. Its sale represents a lifestyle change for its owners, Rosie and Rob Johnson. During lockdown they discovered they could work remotely from anywhere, and a move at the start of the pandemic to Clifden encouraged Rosie to start her own interiors business, Provenance, in the popular west of Ireland town.

The interior designer, who specialises in antiques, fabrics and soft furnishings, had initially thought her new business would be online. But the chance to open up a brick-and-mortar shop – and its instant popularity, particularly with staycationers last summer – prompted the couple to plan a move out of Dublin, while looking to buy a smaller base in the capital once the Blackrock home is sold.

They bought the bungalow – called South Bank – in 1993, nearly doubling its size two years later in the first major renovation, and then eight years ago extending again so that the house has 162sq m (1,743sq ft). This doesn’t include the two large attic rooms – one with en suite which is used as the main bedroom; the other a family room. The conversion provided a substantial additional 71sq m (764sq ft) of space.

The work over the years, which included installing Rationel triple and double glazed windows throughout, brought the energy rating up to a B3. There are three other bedrooms and a large family bathroom. Recent upgrades include a new kitchen – from Blackrock Kitchens – installed in 2017 in the open-plan ground-floor living area and there is also another more formal living room overlooking the garden.

Unsurprisingly, given that it is the home of an interior designer experienced in commercial and domestic projects, it is in turnkey condition. The semi-detached bungalow in the mature residential area has a garden wrapping around the front, side and rear.