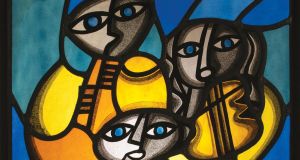 Dolan’s first timed online art auction on its new website is now open for bidding. More than 250 lots feature in the sale, which will end on Monday, January 25th. An array of rugs, vintage books, some French wines and interesting pieces of furniture feature, along with art to suit all tastes.

Of interest is a piece of stained glass by Manus Walsh, the Clare-based artist whose works feature in Galway Cathedral and St John’s Church in Ballyvaughan.

His work, which has been described as cubist, abstract and surreal, features in a select number of public collections including the Office of Public Works, Allied Irish Bank and the Insurance Corporation of Ireland. The piece entitled Musicians, Ceol Series – which measures almost a square metre – is listed with a €600-€800 estimate.

Also for sale is an early Cecil Maguire work. Dating from 1963, Purteen Harbour, Achill (€6,000-€8,000) is from the time when Northern Irish artist Maguire – who died in May 2020 – first fell in love with the landscape of the west of Ireland. He and his wife, Mona, subsequently purchased an apartment in Roundstone and divided their time between there and Belfast.

Ranked highly as an Ulster landscape painter of the 20th century, along with Maurice Canning Wilks, Frank McKelvey and James Humbert Craig, fans include President Michael D Higgins, who said that Clifden Fair, Winter by Maguire was the first painting he bought with his first pay packet from NUI Galway.

Some 14 works by Limerick artist Henry Morgan are also listed. His inspiration from the rugged landscape of the Burren and west Clare is evident in the works that include crashing waves and cliff scenes, within a myriad of blue hues. Estimates range from €400-€1,800 for some of the larger oils.

More blue tones are found in a particularly unusual work by Harry Kernoff. The Blue Duffle of a peculiar looking girl bears a remarkable resemblance to the facial features of one of the men in his famous painting, A Bird Never Flew on One Wing, which hung on the walls of O’Brien’s hostelry on Leeson Street in Dublin. That painting was purported to inspire the character of Star Trek’s Mr Spock. Legend has it that a Hollywood designer saw the painting in O’Brien’s which inspired him to create the half-Vulcan, half-human character. A Bird Never Flew on One Wing achieved €180,000 through Adam’s in 2009 and the listed price for the little girl in The Blue Duffle – who to be honest looks like she has a very dark side – is €1,600-€2,400.