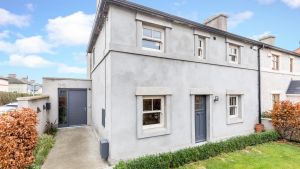 Dublin 3’s West Road runs along the commuter train line embankment and is just minutes from Newcomen Bridge via Ossory Road. This gives it an ease of access to Connolly Station, the Red-line Luas at Busáras and the off-road cycle path that takes you down to the Samuel Beckett Bridge, commuting options that other parts of East Wall do not enjoy access to quite as readily.

Number 25 is one of a pair of semis on a mostly terraced stretch and has an east-facing back garden.

When its owners bought it in April 2013, at the bottom of the market, it was in original condition and measured just 73sq m (775sq ft). They paid €89,000 for it, according to the property price register, and extended out, to the side and to the back of the house. The design was by Flavio Lombardo Architects.

Now double its original size at 144sq m (1,550sq ft), the house has been completely reimagined in its layout and is a fine three- to four-bedroom home in an area where much of the housing stock is less than an average of 100sq m.

Extending out to the side allowed the owner to install a valuable ground-floor guest toilet and a roof light to bring in more daylight to the entrance hall. The rest of the entrance floor is set out in a broken-plan fashion with a roomy dining room and kitchen to the back where there is direct access out to the east-facing back garden.

The Huenna-designed kitchen has a utility hidden to the rear that allows you to close the door on drying laundry and noisy washing machine spin cycles.

The perfect place to soak up the morning sun, the garden has low-maintenance paving and pedestrian rear access as well as a graffiti tag by artist Dan Leo, who is represented by the Hang Tough Gallery. It adds gritty urban flavour to the outside space which was created by Boru Landscapes.

To the front is a decent-sized sitting room where the inglenook fireplace has been lined with a smart blue ceramic tile that brings in a decorative aspect as well as reflecting heat from the wood-burning Jotul stove back into the room. The original front door of the house remains in situ in this room and helps to narrate the story of its refurbishment.

There are three bedrooms upstairs. The main bedroom spans the width of the house and comprises a walk-through wardrobe and shower en suite. The other two bedrooms share the family bathroom.

As well as looking smart, the house is toasty warm thanks to its impressive B3 BER rating.