The new Mini, which nods to its origins to keep purists happy, is now made by BMW 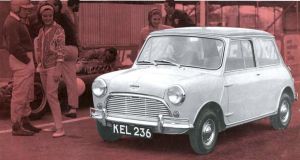 The Mini became a symbol of freedom and fun. Photograph: GP Library/UIG via Getty Images

That great British design icon – the Mini – was designed by a Greek. Engineer and designer Alec Issigonis (1906-1988) had helped put post-war Britain on the road with his work on the Austin 1100 and Morris Minor, and in 1955 he was recruited by the British Motor Corporation (BMC) to design three new family cars. By 1959 the smallest of the three models, the Mini, was unveiled to the motoring press. His vision was a car that could comfortably carry four people – and their luggage – and be light on petrol. The Suez Crisis had once again plunged Britain into fuel rationing in 1956. His engineering solutions – notably the transverse engine, the front-wheel drive and the 10in wheels – made space in the cabin and influenced small-car design for years to come. The first production run was 20,000 and by 1962 BMC was making 200,000 models – the millionth Mini rolled off the line in 1965 as the car became a symbol of freedom and fun, appealing to all demographics, from pop stars to librarians. The quintessential Swinging Sixties car is now 60.The basic design remained mostly unchanged when in 2000 the last Longbridge-made Mini was produced to great ceremony, with other British pop culture icons from the 1960s – including model Twiggy and singer Lulu – on hand to mark the occasion. The new Mini, which has enough nods to Issigonis to keep purists happy, is now made by BMW.