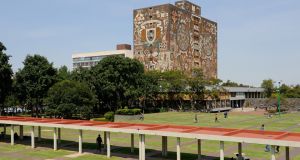 The Central library of the National Autonomous University of Mexico City. The library is ten stories high and covered with mosaics by Juan O’Gorman, representing Aztec culture in Mexico city. Photograph: Getty Images

IT'S incredible how successful the offspring of our diaspora can be without the Irish batting an eyelid. One of Mexico's most famous architects, Juan O'Gorman, was the eldest son of an Irishman, Cecil Crawford O'Gorman, who had moved to Mexico from Ireland in the late 1890s.

Juan studied architecture in Mexico City and graduated with a fascination for modernists like Le Corbusier and for socialism, a combination that shaped his work throughout his life.

His most famous work is the house and studio he built for the Mexican artists Diego Rivera and his wife Frida Kahlo in 1932. It is now one of the most fascinating museums in Mexico City and stands apart for its impact on architecture there.

Approaching it on foot, its colours, shapes and forms still wrench this colonial part of the city straight into the future. This was no ordinary house and its design stunned the elite of Mexico City when it was built. According to its director, Magdelana Zavala Bonachea, everything about it offended the then residents of the San Angel quarter of the city where it stands.

This was a part of the city that still clung tightly to the colonial-style architecture that even today defines the homes of the Mexican elite and the young upstart that was Juan O'Gorman was out to shake-up this establishment.

This was only the second house he had ever built. The first being next door and which had been built for his father and, according to Bonachea, the neighbours had hated its functionalist style also and they quickly dismissed the new graduate's style.

Today, walking through the rooms of the Diego-Kahlo house, the taste and smell of its owners and architect is palpable. There are no roped-off areas, no exhibits behind glass. This is a house as it was lived and so it feels alive. You see Rivera's bed, his clothes hanging in the wardrobe, the magazines he read and his images of Frida all around.

O'Gorman's plan for the house was to create a building that reflected the volatility and emotion of its owners' relationship. Frida Kahlo and Diego Rivera were no ordinary couple and their relationship, formed on the back of both their artistic careers, was already the talk of the town.

Bonachea explained how O'Gorman wanted to build the perfect artist's home and studio. He had become a close personal friend of Diego and, reportedly, had fallen deeply in love with Frida. These emotional ties helped shape his vision of what he was building and can be traced throughout the houses.

He was also fuelled by functionalist design and introduced functionalist aspects throughout the house that simply drove against the popular tide. Bonachea laughs when she relates the horror with which the house was viewed by its wealthy neighbours.

At a time when indoor stairwells defined wealth, he built an external curved concrete stair that linked each of the floors, allowing the private goings-on of the Rivera-Kahlo household to be open to the world.

Also, rooftop patios at that time were used only by servants. O'Gorman opened up his roof terraces as a central part of the home and made these lofty spaces perfect for the wild parties and events that helped keep Rivera and Kahlo in the public eye. He installed rain-water bins and metal gutters, but one of the most difficult pills for neighbours to swallow was the cactus fence that surrounds the house.

O'Gorman grew up in a town outside the city where a cactus fence was a common sight, but in Mexico City it was considered a throwback to poverty. O'Gorman made sure that this hard prickly plant, so much a natural icon of Mexico, would also come to define his work.

But standing out was never going to be difficult. The house is, in fact, two separate buildings joined by a bridge. Frida and Diego were notoriously unsuited to living together but at the same time couldn't live apart, and so, the house O'Gorman built reflected that. A bridge linked the two parts of the house with two patios.

O'Gorman had worked on a very tight budget and this suited his functionalist style well. The internal doors were untreated sheets of asbestos in a metal frame, the ceilings bare concrete slabs. The electrical wiring wasn't hidden behind plaster but ran along the walls and ceiling in full view.

But the defining aspect of this house, in terms of its function, has to be the use of natural light. Frida's blue house had floor-to-ceiling windows on both the street and the garden side. Diego maintained some privacy from the street but his studio garden wall is also floor-to-ceiling glass.

A painter needs good light, and O'Gorman respected this. He built a strip of small shaded windows that ran across the top of Diego's studio window that were engineered to reflect and curve light around the room at all times of the day. With a minimum of materials he managed to flood the room with natural light while also preventing the sun from shining directly into the room at any time.

Frida's house was equally well planned and she painted many of her most famous paintings there. Unfortunately, the Frida Kahlo estate has moved all her work to her family home and so to really understand this couple you must visit both of her homes.

After building the Diego-Kahlo house Juan O'Gorman went on to have a remarkable if not altogether successful career. Despite his notoriety for his houses, he built only a small number and reportedly found the criticism they received very hard to deal with.

For many years he devoted his work to building large, functionalist and very well received schools around Mexico. He was also a painter and in another U-turn, he turned away from functionalism late in life and built himself a home outside Mexico City that was partly in a natural cave. He decorated it with images from Aztec mythology and other indigenous Mexican decorative motifs marking his departure from the functionalist ideology that had defined his working life.

O'GORMAN COMMITTED SUICIDE in 1982 at the age of 76. Allegedly, and with great drama, he hung, shot and poisoned himself in the garden of his house.

Letters found in the house revealed that he had planned his death for many months and that he had hoped to have been found by his then estranged wife who he had invited to come and talk with him. But having been unable to gain entry to their house she had gone to stay with friends and so he was found the next day by his servants.

A sad end to a remarkable career.

Museo Casa Estudio Diego Rivera y Frida Kahlo is located in the San Angel quarter of Mexico City, Mexico, and is open daily from 10am to 6pm