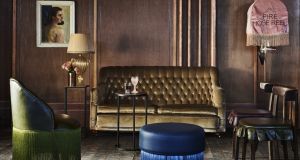 The Imperial, in the suburb of Erskineville, Sydney, is a symphony of jewel tone colours embellished with heavy duty fringing. Photograph: Anson Smart

Set the scene at home with theatresque velvets and swaggy, chorus girl fringing to bring your décor bang up to date. Inspired by the film Priscilla, Queen of the Desert, The Imperial, in the suburb of Erskineville, Sydney, is a symphony of jewel tone colours embellished with heavy duty fringing.

Once home to bohemian writers, artists and thinkers known as the Bloomsbury Set and situated a stone’s throw from The British Museum, The Kimpton Fitzroy London hotel commissioned Tara Bernerd and Russell Sage & Partners to reimagine its interior architecture and design. You can imagine gossiping on its deep button, velvet-clad conversation seat, which is set below a disco ball. Thirty bespoke cast-iron panels surround the lobby fireplace.

The property’s original architect, Charles Fitzroy Doll, also designed the dining room on the ill-fated RMS Titanic, copying the design from this establishment, once called the Russell Hotel. Conversation seats are making a return to fashionable drawing rooms and large halls and one of the most affordable places to find examples is at auction.tarabernerd.com; kimptonfitzroylondon.co.uk

If you want seating that looks like it might just do the cha-cha-cha, look no further than this Fringes Armchair by Portuguese design house Munna. Fringes draws on the current fashion for franjas, ruffling the home scene and might even invite guests to become flirtatious and wild. The plush seat comes in a range of colours including the coral, pictured, and a sublime blue velvet, and wears a tiered back of blunt fringing that covers the outer arms and curved back. It costs about €3,060, ex VAT and delivery. Rockett St George has a similar style of seat. Its design is slightly more affordable, comes in peignoir pink velvet and matching trims and costs about €2,163, ex delivery. munnadesign.com;rockettstgeorge.com

4. FRINGING INSTEAD OF DOORS

In terms of fabulous furniture Ibride’s Alpaga bar would consider itself more of a leading lady than a chorus girl. The 140cm long, limited edition design features two layered curtains of tonal fringing that replace traditional doors on this piece making it something that will work in a small space. It also has a concealed space set in the top where you can put other precious articles. Designed by Benoit Convers, it is available in Twilight Purple, a blend of blues and purples, and Flamboyant Red, a blend of burgundy and red, from UK-based Made in Design where it costs about €4,352, ex delivery. ibride.fr;madeindesign.co.uk

British light company Rothschild Bickers is run by Irish woman Vicky Rothschild and features beautiful, hand-blown glass pendant lights that Róisín Lafferty of Kingston Lafferty has used on several projects. Its Vintage design has a glass form that wears a tonal fringed skirt and comes in six smoky colours. Lafferty installed several in the parlour of hot new tourist attraction The Vaults. It comes in two sizes with options to play with the colour of the ceiling rose and flex colours; medium, from about €555, and large, from about €693, ex delivery. German raffia design firm Llot Llov’s Fran pendant has a fluttering body made of high-quality rayon, a viscose fibre based on cellulose that ranges from a small subtle bob, €195, to a strong statement piece, €860, and is available in four bold block colours – beige, red, green and black.rothschildbickers.com; llotllov.de

Valencia-based Houtique batted lots of flirtatious lashes when it presented its Wink pendant a few seasons ago and last month it threw one hell of a show at Paris design fair Maison et Objet where it launched its new and super sexy Dejávú bar stools with co-partners Masquespacio. They’re the kind of seats that grab you and will make you want to climb aboard, sip champagne or whiskey cocktails, while taking the top for a spin to see how the fringing shimmies underneath. Prices have yet to be set but expect to see them populating social media feeds and propping up the coolest of bars. houtique.es/

German brand Pulpo’s Pow sofa, by Hermann August Weizenegger, has soft curves and is tactile to the touch. It has black feet and comes in four velvet colours: red, pictured, blue, green or black and costs from about €3,200. Also pictured is the new Stellar Grape glass floor light by Sebastian Herkner. Pictured in the aubergine colour, it is also available in a smoky grey or a clear glass option and costs about €2,890. The Alwa side tables, pictured, cost €1,250 and €1,450, all to order from Dún Laoghaire-based Lost Weekend. pulpoproducts.com; lostweekend.ie; sebastianherkner.com

Accessories also worth noting are fringed cushions: the Gatsby, €30 each at Harvey Norman, and €52.99 for Gallery Tallara at Littlewoods Ireland; Ben & Aja Blanc’s Apollo mirror, about €1,660 from NY-based The Future Perfect, another cool mirror, the Dreamcatcher mirror featuring lacquered iron “fringing” underneath its eye shape, by Italian Nicola Falcone, €2,950 and bedside lamps by the same brand, €495 each. Harveynorman.ie; littlewoodsireland.ie; nicolafalcone.ie; thefutureperfect.com

Walk for the weekend: a Connemara climb brings rich rewards
6

I’ve long given up trying to be cool and aloof. Now I’m an expert at small talk
7