Carol Booth: ‘I gilded toast and then floated it in soup’

The Specialist: Carol Booth is a practitioner of the ancient craft of gilding and has worked on public and private commissions, restorations and has a range of decorative mirrors 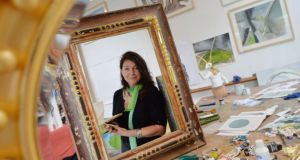 Carol Booth in her studio in Abbeyleix, Co Laois. During the heyday of the Celtic Tiger mirrors and overmantels “were flying out the door”. Photograph: Alan Betson

Sunlight in solid form is how the artist Carol Booth describes the effect of the gilded surface. A practitioner of the ancient craft of gilding for the past quarter of a century in Ireland, she has worked on public and private commissions, restoration projects as well as designing her own range of decorative mirrors. Her work can be found in the Irish Embassy in Berlin, Ard na Sidhe in Co Kerry, the Mansion House and the Clarence and Clarion Hotels in Dublin. In Dublin Castle, she restored the peacock weathervane in unvarnished gold “because unprotected gold lasts forever”, she explains.

One of the highlights of her career was the restoration of a magnificent mid-18th century mirror by Francis and John Booker of Capel Street, Dublin, covered in brown paint, which was returned to its former intricate gilded glory of fluted columns, flower festoons, urns and acanthus and later sold for €120,000 in 1998. “I had to soak the mirror with garlic and water to make the wood more porous for the gesso,”she says.

A fine arts and sculpture graduate from NCAD, Booth was an unmistakable figure around town in the 1980s on her bicycle with her magenta spiked hair, plastic bags and vibrant personality. Shortly after hanging her graduate collection in 1985 she left Dublin for the US where she lived for the next seven years in the basement of an old church in Santiago “where I could have massive big paintings in multimedia, spray paint, charcoal, black paint, anything”, she says with a laugh.

Business, from private clients, antique dealers and public commissions, thrived and included not only restoration work, but also designing a range of modern mirrors in silver and gold leaf made to order. “Men particularly liked the squares, but not the vulva shapes at all. Women were more flexible,” she says.

During the heyday of the Celtic Tiger mirrors and overmantels “were flying out the door – there was lots of gilding of consoles and furniture and then the trend was to mix the old with the new – so you had the gilt overmantel and a modern painting. People wanted gold high, not toned down with earth pigments in the conventional way”, she says, such was the taste for opulence at the time.

The gold comes in sheets of 25 leaves in about 20 different colours and she buys it directly from a goldbeater in Florence called Manetti. Once it has dried, the high points are burnished with an agate stone so that it becomes like a mirror. “The word gilding means laying leaf,” she says.

In 2000 she downsized, moving her studio to her home in Seapoint and six years ago moved to Co Laois where she is now based and where she divides her time equally between gilding and painting. The day we met she had just delivered a console and overmantel in silver leaf to a private house as well as despatching a number of her Irish landscape paintings to a new shop due to open in Boston in January by furniture-maker Charles Shackleton and glassmaker Simon Pearce.

A gifted cook, Booth has applied her gilding skills to other areas, more recently food. “I gilded strawberries for a Riverdance opening and for a girlfriend’s party. I’ve also gilded toast and then floated it in soup.”

Earlier this year she and five other Irish painters exhibited their work in Chennai in India and she is currently working on a series of paintings of “demented” women, but that’s another story. “I am only really starting my painting career now because I have been gilding solidly for the past 25 years. I can finally allow time to develop that.”