Before and after: architect duo bring their office home 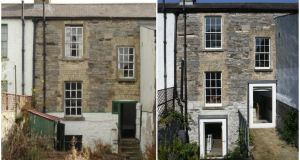 The idea of creating your studio, your own place of work, within your own home, is a bold move. Only lovers of their craft would ever consider such a thing; giving over precious floor area at the sacrifice of an extra bedroom or bigger livingroom within the cocoon of your own home may seem like a good idea until a busy Monday morning hits.

While technically it means you can get through your morning emails in your dressing-gown, it also means you’re never really disconnected from your workplace.

Mindfulness, mental space, and the ability to disconnect is becoming ever more precious in our working life, so it would seem counterintuitive to opt for such an inclusive layout.

It requires dexterity, duality, compromise and balance to ensure work and life can function without interfering with each other.

Of paramount importance is that it must be a symbiotic relationship, where both functions feed and nourish one another, to the benefit of both.

To put it simply, you just have to love what you do if it’s going to be a major part of your home.

For architects Douglas Carson and Rosaleen Crushell, their approach to their home/office design is refreshingly honest and unfussy. They describe the house as an ongoing work-in-progress for their practice, Carson & Crushell. Their home, and their office, all under one roof.

The raw materials include calp limestone, yellow brick, pitch pine, sand, Wicklow slate, North Dublin concrete blocks, sprinkled with the odd piece of granite, lead steel and even some douglas fir. So much for the three-material palette as the key to achieving a beautiful interior aesthetic.

At its heart is a simple Georgian terrace in Dublin. Through a series of architectural moves, and a light-touch approach to conservation repairs, the emphasis was placed on materials and proportions sympathetic to the historic composition of the original house.

A waterlogged basement was regained through blockwork retaining walls to create two courtyard gardens. This gives a split-level arrangement – and it’s a solution that really works in this house typology because it ensures light and connectivity to the lower level, which is fundamental to the rooms being used and enjoyed. As always, it’s this access to light that changes spaces.

The basement door is set inside the lowered opening of an original window, while its rear counterpart is more proud, opening out into the rear courtyard.

The materials for the new walls was where things really got interesting. Stacked douglas fir, fixed without glue or screws, separate the bedrooms from the bathroom and stairs. No studwork or plasterboard needed. The implementation of the material is ingenious, simple and also quite beautiful.

On the raised ground floor, walls were removed to create an open-plan living space with views east, west and to the main staircase that is so often the key to a good floorplan in such houses.

A garden door, mirroring the basement door’s placement, gives access onto a terrace of bricks salvaged from the interior. The top-floor “piano nobile” room (this is what architects call the principal rooms of the house) contains the homeowners’ architecture studio where they work on their numerous conservation and new-build projects. Integrated but separate.

Textured atmospheres were formed to accommodate both new and old fabric, and it’s that “feeling” of atmosphere that makes this project really stand out. It’s the combination of the various materials, raw and honest, that gives a certain beauty to the simple series of rooms.

There is no one big design move here. It’s the series of small interventions that collectively unite the house from top to bottom, giving a subtle consistency between functions so that you’re never really quite sure if you’re in the office, or in the livingroom.

This project received a special mention in the Architectural Association Awards in 2017 and it’s easy to see why. It has a deft touch evident in the work of the practice, truth if needed that they certainly practice what they preach.