A case of the moody blues for autumn

From kitchens to bowls, the outlook is far from blue 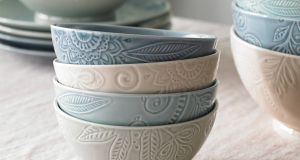 Denby’s Monsoon Gather range features muted shades of pink, grey and green, and will be available at Arnotts for autumn. 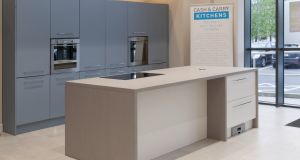 Cash & Carry Kitchens is right on the button with its new Denim Blue kitchen. 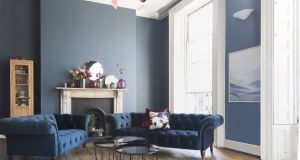 The Ellie large sofa from Harvey Norman is €999. 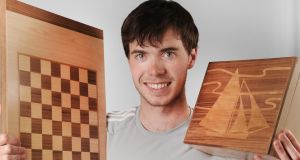 Daragh Keady from Barna, Co Galway is one of eight students from Ireland and the UK who has been chosen to participate in the prestigious Linley summer school.

Blaine Callard, chief executive of Harvey Norman Ireland, is in bullish form. “We’re going to bet the farm on home and interiors,” he says. But while the company spends two weeks every season setting up shots for its bi-annual catalogue to show off its furniture to the best of its ability, it is its tech and appliances that are its cash cows – making up 60 per cent of the firm’s overall business. How? Because the straight-talking Callard has invested heavily in jargon-busting training measures to ensure that however literate or illiterate you are on the subject, the customer remains king.

“You are encouraged to ask questions,” he explains. “All devices are compared and contrasted using simple measures that include battery life; how powerful a model is; and the model’s weight.” The result is deliciously customer-focused. The staff don’t look at you as if you time travelled from a different century when you don’t understand something.

The TV department stocks models costing from €99 to €24,000 and on the morning of the recent opening of the new Tallaght branch mesmerised many of the invited guests. It’s a big part of the shop’s appeal, he explains. “Fifty per cent of the big screen TV market is sold at a Harvey Norman store with more than 30 TVs with a price tag of €20,000 or more sold in the last 24 months.”

Staff here are taught how to engage and to continue to ask questions,” he says. The result is that you get informed answers, however tiresome they may sound to the employees. It is refreshing and it means you end up buying the device or appliance most suited to your needs rather than being blinded by fashion or advertising. It’s a similar story in the appliances department.

The shop has made huge strides in its furniture design too. The company recently hired Yvonne Nugent to be its head of homewares. Nugent has a background in fast fashion, working as buying director at A-Wear, then taking up a role with Penneys before disappearing Down Under to become head of ladieswear at discount department store chain Big W in Sydney, part of the Woolworths Group. She’s creating cool bedding and a strong range of covetable soft furnishings.

Carry out a kitchen

There’s a bit of a blue trend emerging in interiors, and Cash & Carry Kitchens is right on the button with its new Denim Blue kitchen. That’s not as alarming as it might sound, by the way; this is a warm, rich shade which bears no resemblance whatsoever to your favourite pair of tatty jeans. Check it out at one of the Irish-run, Irish-owned company’s newly opened showrooms at Fonthill Retail Park in Dublin and Toughers Business Park, Naas, Co Kildare.

The legendary guitarist BB King once observed that “Blues is a tonic for whatever ails you. I could play the blues and then not be blue any more.” Something similar could be said of the cheery new collection in Denby’s “Always Entertaining: the Blue Edit” range, which will be available at Arnotts for autumn. This hand-crafted tableware features four of Denby’s complementary blue tones, each with the textured glaze which makes every piece unique. Made from stoneware using Denby’s renowned iron-rich clay, these luscious bowls come in a range of sizes from bijou receptacles which are perfect for dips and side salads to coupe plates for tapas, olives and slaws. But if blue really isn’t your colour, the Monsoon Gather range features muted shades of pink, grey and green, while the Studio Craft collection goes for a rustic aesthetic with its rich, earthy tones and raw textures. arnotts.ie

One young man who is definitely not singing the blues this summer is Daragh Keady from Barna, Co Galway. Having just completed his first year on the BA (Hons) in Education (Design Graphics and Construction) at GMIT Letterfrack, he is one of eight students from Ireland and the UK who has been chosen to participate in the prestigious Linley summer school. That’s Linley as in David Linley, aka David Albert Charles Armstrong-Jones, second Earl of Snowdon and nephew of Queen Elizabeth, who founded the school in 1985 with a view to passing on skills in cabinet-making and marquetry to students from the best furniture colleges on these islands.

Keady was awarded a full bursary to attend the course, which is being held in a beautifully restored 14th-century tithe barn in Wiltshire. When he returns from his week studying with master craftsmen Jonathan Rose and William Warren, he will be heading to Claregalway College to continue his teacher training programme. messumswiltshire.com