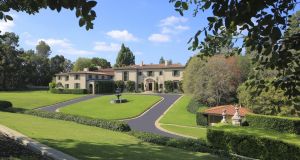 A house in Los Angeles that sold for $90 million (€77 million) just 10 months ago is back on the market, seemingly untouched, seeking $180 million. The historic Owlwood Estate, which occupies a 10-acre site and features about 12,200sq ft of space, has been home to a host of business and entertainment figures, including the singer Cher and actor Tony Curtis. Marilyn Monroe once lived in the guest house on the estate. It is located in the exclusive Holmby Hills area of LA, where record prices are regularly paid for homes – including the $100 million sale last year of the nearby Playboy Mansion.

Owlwood was acquired in September 2016 by local developer Woodbridge Luxury Homes, headed by Bob Shapiro, through an investment vehicle. While no changes have been made to the property, the owner brought together a team of top architects and designers to devise a redevelopment plan for the property, which would see additional homes built on its grounds.

The redevelopment plans were drawn up by Plus Development, the luxury property company co-founded by 29-year-old Irishman Tyrone McKillen, who told the Los Angeles Times that Owlwood is “probably one of the greatest single properties in all of America.” McKillen is the son of veteran investor Paddy McKillen.

Plus Development is involved in a swathe of LA’s most impressive one-off residential development projects. One of its smaller projects at the heart of Beverly Hills is an 8,500sqft Spanish-style property. Reportedly purchased by its owner for $7.4 million two years ago, Plus Development managed the redevelopment of the property, before it was offered for sale again in recent weeks at $16 million.

On Bel Air Road, the company is managing the development of colossal 34,000sqft mansion. When built, the house will is expected to attract a nine-figure sum given that the recently completed house next door, which is just marginally larger, is currently for sale at $250 million, making it the most expensive listing in the US.

A few minutes away on St Cloud Road, the company is managing the development of another spectacular 30,000sqft house on a one-acre site, which was acquired in 2016 for about $18.2 million.

The property is located mere moments from a house being built by Tyrone’s brother, developer Dean McKillen, on Cuesta Way, which will likely set a new record for a Los Angeles home when it sells. The 30,000sqft house attracted headlines earlier this year when entertainers Beyoncé and Jay Z reportedly offered McKillen $120 million for it. That price is likely to generate an attractive return for his investment vehicle, named Cuesta Estate LLC, given that records suggest it paid just $15 million for the site in 2013.

The completed mansion features no less than four swimming pools and eight bedrooms and was designed by Irish architect Paul McClean, who has been busy in recent years designing many of LA’s most extravagant homes.

Melania Trump’s Christmas decorations: Straight out of The Handmaid's Tale?