Siobhán Lam and her partner Jamie Hughes, who run online interiors shop April and the Bear, lived on site while they transformed a redbrick property into a new home 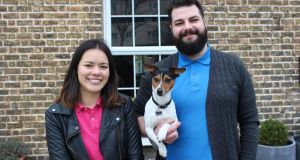 Siobhán Lam and her partner Jamie Hughes: they traded favours with friends by inviting them for beer and pizza to help with the demolition. They also watched YouTube tutorials and TV decorating shows. 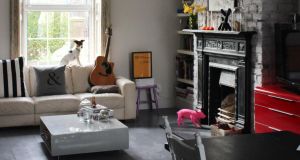 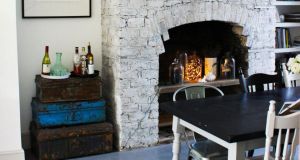 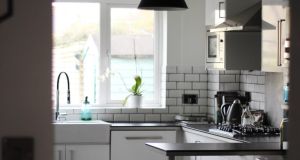 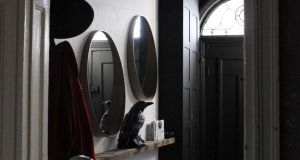 The only way Siobhán Lam and her partner Jamie Hughes could get their own place was by doing a lot of the renovation work themselves.

Having spent two years looking to buy, bidding on a few houses and apartments, Lam, who runs online interiors shop April and The Bear, recognised her Portobello period redbrick, which was divided into three flats, as being a diamond in the rough.

Lam and her partner, retail manager and band member Jamie Hughes, could only afford to buy it and live in it by doing much of the renovation work themselves.

They couldn’t afford to rent elsewhere while the work was ongoing so they made the decision to live on site, in one of the property’s bedsits.

In Hughes, she had someone who was handy. He used to work with his father Paul, a retired carpenter, who gave them the courage to take on such a big project. “He really showed us what we could do ourselves and when to call in the experts,” Lam says.

First they had to clear the house, filling an estimated 20 skips. Wanting to knock open the two reception rooms on the ground floor into one open space, they called in an engineer to install rolled steel joists to create support before they knocked down walls using sledgehammers.

They traded favours with friends by inviting them for beer and pizza to help with the demolition. They also watched YouTube tutorials and decorating shows. RTÉ’s Room To Improve and Grand Designs became must-see TV.

They didn’t change the footprint of the house or extend it, so most of the dirty work involved clearing the bedsits and knocking down walls.

They pulled down ceilings, stripped walls back to the bare brick, scraped off wallpaper and removed paint from fireplace surrounds. Lam says the worst day was when they discovered a blocked-up chimney where they had wanted to put a window.

“Of course we did. It is a very difficult situation to be living on a building site. No matter how many dust sheets you lay down, the dirt gets everywhere. But we knew we were creating a home that was totally us and for us for the next 10 or 20 years.”

Coming from a buying background Lam had mood boards for every room in the house and a clear idea of what she wanted, but she couldn’t find the kind of thing she was looking for. In a way her online shop was conceived in the house.

Three and a half years later, the property while transformed in part, remains a work in progress. The open-plan living diningroom and kitchen have been renovated. A smart spare bedroom on the return is complete. What they hope some day will be the master bedroom is for now the office- cum-storeroom for the shop.

Once two rooms, they knocked it through to make one room the width of the house. Overlooking the canal it is serene and sunny. For now the couple still sleep in the original bedsit. The bathroom remains a bit of a builders yard, Lam admits, and is full of plywood and building materials.

They would love to install wood sash windows but until they can afford it, they can live with the ones in the house when they bought it.

“Taking on a project, you have to be realistic and honest with yourself in what you can achieve and how long it will take to execute,” Lam says. “You need to know what is most important to you. We were willing to accept a doer- upper. It has given us the scope to make the kind of home we want to live in.”

Watch Siobhán Lam and Jamie Hughes on Thursday at 8.30pm pm on RTÉ One’s Home of the Year, a hunt for the nation’s most interesting house

TAPE IT UP: Masking tape or washi tape can be used to create cheap decorative elements. Lam has used black tape to create an abstract tree-like motif on the dining-room wall. In the spare bedroom she has used little plus shapes to create a repeat pattern. and it is easy to remove. A set of five rolls costs €18.95. aprilandthebear.com