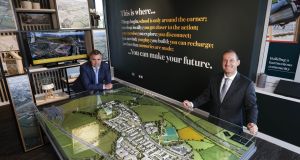 Had it been a scene in a movie, it wouldn’t have ended well. A short drive along a circuitous route through open fields on the edge of a motorway on the outskirts of the city followed by a meeting with two men in suits wearing surgical masks.

Thankfully however, nothing untoward came of this meeting with Eddie Byrne and Michael Hynes of homebuilder Quintain Ireland at the company’s as yet undeveloped Cherrywood Village site in south Dublin. The masks are, of course, an obligatory requirement for doing business in the midst of Covid-19.

And when it comes to progressing the hugely ambitious masterplan it has for Cherrywood, Quintain would seem intent on doing quite a lot of business between now and 2025. By that point, the company says it will have completed 1,300 of the 3,000 new homes it has in mind for the wider 118-acre Cherrywood land holding that its owner, US private equity giant Lone Star, acquired from Hines and King Street Capital in a €120 million deal last year.

If they build it, the buyers should surely come given the ongoing strength of demand for residential accommodation in Dublin and its ever-expanding commuter belt. Those considering a move to Cherrywood Village, meanwhile, will be pleasantly surprised by the developer’s stated objective to deliver up to 60 per cent of the new homes at the south Dublin scheme at prices below the €500,000 threshold first-time buyers require to qualify for the Government’s Help-to-Buy (HTB) scheme.

Given Quintain’s obligation under Part V of the Planning Act 2000 to deliver 10 per cent or 130 of the 1,300 units at Cherrywood Village for social housing, and its expectation that it will sell up to 30 per cent or about 390 units to an institutional investor involved in the private rented sector (PRS) market, as many as 400 of the homes offered to the traditional owner-occupier market should come in below the €500,000 mark.

That figure isn’t something to be sniffed at, but it’s a rare enough find for Dún Laoghaire-Rathdown where, according to the latest CSO analysis, the mean price is the highest in the country at €601,214.

While the levels of affordability at Cherrywood Village remain to be seen, there will be those who have concerns that their “forever home” could end up being surrounded by rental accommodation occupied by residents with little or no long-term stake in or commitment to the local community.

Asked where the private rented sector (PRS) will fit into its overall scheme, Quintain joint managing director Eddie Byrne said: “We strongly believe that every community should have a mixture of private renters, public renters and home owners. The mix in Cherrywood, as in all of our sites, will depend on demand and, as such, we do not have target figures at this stage.

“We certainly anticipate BTR [Build to Rent] apartments and possibly some houses as part of the masterplan, but the majority of homes will be for sale. The rental element will likely be focused on particular blocks rather than mixed throughout.”

With a decision due from the local authority on Quintain’s planning application for the first 136 houses at Cherrywood Village on Monday, October 12th,  the developer is inviting prospective buyers to register with agents Sherry FitzGerald through cherrywoodvillage.ie for a one-on-one tour of the site (subject to Covid-19 guidelines) and a visit to the scheme’s marketing suite. The first properties are expected to be brought to the market in mid-2021.

So what exactly will buyers get for their money if they decide to put down roots at Cherrywood Village? Quite apart from the choice of houses, duplexes and apartments due to be completed across its 65 acres between now and 2025, the scheme’s residents will have access to a range of amenities, many of them already in place.

The overall Cherrywood masterplan builds on a large network of existing infrastructure including a full road network, the Luas Green line stop at Laughanstown and two public parks. The fully completed Beckett Park includes all-weather sports pitches, tennis courts, jogging tracks, a boules court, an outdoor gym, playground, and a sport pavilion with changing facilities and cafe. Tully Park takes advantage of the site’s heritage, and is built around early Christian monuments and Tully Church, which dates from the ninth century.

In terms of educational facilities, Cherrywood Educate Together National School, adjacent to Tully Park, opened in September, and a secondary school is expected to open in September 2021.

Some 4,300sq m (46,285sq ft) of retail and civic amenities are planned for the scheme’s village centre. This part of the development is set to be anchored by a major supermarket retailer, according to Quintain.

While all of the above will no doubt appeal to those looking for that elusive combination of a brand new home with all the advantages of a long-established neighbourhood, the developer’s vision for the south Dublin scheme may still require a leap of faith for some on account of its sheer scale and the breadth of its ambition.

When asked what assurance Quintain can give to potential buyers that Cherrywood Village will be completed by 2025, the company’s joint managing partner, Michael Hynes, said: “We have a very clear project plan in place which is realistic and which we are confident can be achieved by 2025, and possibly before. The quicker we build and sell homes the better for us, so we are strongly incentivised to deliver on this goal.”