Handsome Monkstown lodge with lodger potential too for €2.5m 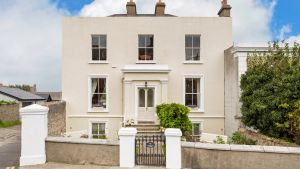 A large house just off Belgrave Square in Monkstown, Co Dublin is a well-maintained Victorian with many of its original period details – and two self-contained ensuite studio apartments at garden level with separate understairs access from the front. It’s a property that could interest someone looking for a home with income or space for adult children now working from home.

The owners of Belgrave Lodge, who have lived here for 16 years, found the layout handy when their children were teenagers. As well as the two studios – upscale bedsits really – there’s also a games room at garden level, with a billiards table and French windows opening into the back garden.

The house sits on a short stretch of road, Belgrave Terrace/Eaton Place, that links Belgrave Square and Belgrave Road, a few minutes’ walk from the Scoil Lorcáin Gaelscoil. Steps from a neat, lawned front garden lead up to a front porch opening into a beige-tiled front hall; it has ornate plasterwork and, like the drawing and dining rooms, a centre rose.

The drawingroom, opening off the hall on the left, is a long, elegant room with a stripped and polished timber floor, large white marble fireplace with green tiles inset, shelving in a recessed arch and a window seat in a tall sash window from where there are views of the sea. A formal diningroom on the right of the hall also has a timber floor.

The Newcastle Design kitchen/breakfast room has a beige-tiled floor, cream units, an island unit topped, like the countertops, with polished black granite, and French windows opening onto a large cedarwood deck overlooking the back garden.

Upstairs, there’s a large, mostly-tiled bathroom on the return – beyond an impressive archway – with a bath, shower and window seat next to a tall uPVC window; both the bathroom and the double bedroom beside it have sea views.

The large main bedroom on the first floor at the front of the house is a bright room with fitted wardrobes and a large ensuite shower room with a small walk-in dressing room beside it. In contrast, two other double bedrooms have feature walls painted in one a vivid red, in the other a deep blue.

At garden level, at the end of a downstairs hall that accommodates utilities, the two double bedrooms/studios are well fitted out. One on the right of the hall has a kitchenette in a corner, a good-sized shower room off it and French windows opening into the back garden. The other has a bedroom with kitchenette, an ensuite and separate dressing room/study.

The back garden is mainly in lawn, with cut-stone walls and raised flowerbeds; steps lead up to the kitchen terrace. There is side access to the garden from a laneway at the side, and pedestrian access onto Trafalgar Lane from a door at the bottom of the garden.

Lockdown Halloween: the safe way to have grisly fun
10