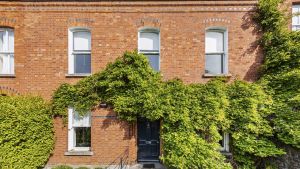 Set between Rathgar Avenue and Harold’s Cross Road is Brighton Square, one of Dublin 6’s loveliest Victorian redbrick squares, this one for residents only using a key to its original wrought iron gates to access the green space and tennis courts.

It’s not actually a square but a triangle – and the houses are less uniform in size and style than might be expected.

Number 19 is a rare property for the square, being double fronted and well concealed behind tall hedging, although when the wisteria around the front door is in bloom it announces itself colourfully. The size of the 298sq m/3,207sq ft five-bed early Victorian is best appreciated from the rear garden, itself quite something at 40m long where the wide handsome house can be seen to be three storey.

The front door is up a short flight of granite steps and off the wide hall, with detailed ceiling plasterwork. To the front on either side are two reception rooms with original fireplaces and working shutters on their tall sash windows.

Down a few steps and running across the width of the house is the kitchen and dining room – once two rooms divided by a hallway it was knocked through by its current owners to create this family-friendly living area opening out to the garden. The cream-painted kitchen was put in about 15 years ago and there is a good-sized utility room.

On up the rambling house on two levels – the original round-headed stained glass window on one of the landings is a lovely feature – are five double bedrooms and a study.

Two of the bedrooms are en suite, and there is a family bathroom made some time ago by converting one of the original bedrooms. It really is almost eccentrically large – so new owners might want to rework some of the rooms while they are updating it.

The back garden will have strong appeal for families – the owners who like to entertain had it landscaped in recent years to include suntrap patios, a lawn, full colourful borders and old trees. Its length and width offer the potential of adding a garden room at one end – there is pedestrian access to a lane running to the rear – and possibly a kitchen extension at the other.

Having brought up a large family in number 19 Brighton Square over the past four decades, the owners are downsizing, selling through Knight Frank, and seeking €1.75 million.