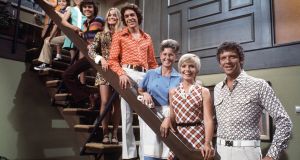 The iconic Los Angeles home where The Brady Bunch once lived in the hugely popular ‘60s and ‘70s TV series has been put on the market asking $1.885million (€1.61 million).

The sitcom revolved around mother Carol Brady, her husband Mike Brady and their blended family of three daughters and three sons, not forgetting Alice the acerbic housekeeper and Tiger the dog.

Number 11222 Dilling Street in LA’s Studio City neighbourhood was their TV home. Built in 1959, the ranch style three bedroom house located in the eastern part of the San Fernando Valley near North Hollywood.

Although the home was used for the external shots, the series was filmed in studio, so viewers to the property won’t find that 60s kitchen and open tread staircase inside.

Estate agent Ernie Carswell of the Douglas Elliman agency told the Los Angeles Times that he’s braced for huge interest in the property which in reality is a modest three home by today’s Hollywood standards. “We’re preparing for an avalanche” he said.

The house is ranked among the top 10 most iconic houses from movies and TV series, which includes the Chicago suburban house in Home Alone, the White House lookalike LA mansion from The Fresh Prince of Bel Air, the Forest Gump house, built specially for the film and the Amityvill Horror house in New Jersey.

“This iconic residence is reportedly the second most photographed home in the United States after the White House,” according to the brochure. “Whether inspired by the TV family or the real life surrounding neighbourhood, this residence is a perfect postcard of American 70’s style and its special culture.” Photos show wood panelled walls, beamed ceilings and some psychedelic wallpaper in the split level home.

The price tag is higher than any of the neighbours would expect to get their homes - around $500,000 over the average for the neighbourhood, reflecting its starry reputation. However, it was initially chosen as the Brady home because of its design and modest size, Brady Bunch creator Sherwood Schwartz told the Los Angles Times in 1994. “We wanted it to look like it would fit a place an architect would live.”

However, it is speculated that a buyer will demolish the property, which sits on a more than 12,500-square-foot plot, and build a new residence.

“We’re not going to accept the first big offer from a developer who wants to tear it down,” Carswell told the Los Angeles Times. “We’re going to wait a few days, in case there are others who want to purchase it as an investment to preserve it.”

Turbocharge your barbecue: Tips from the pros for cooking over flames
5