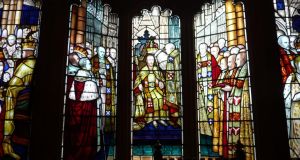 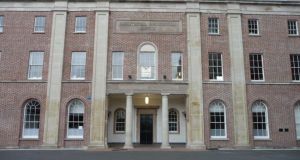 Few historic buildings in Ireland have such resonance as Derry’s Guildhall. Once the symbol of gerrymandered Unionist domination, it suffered serious damage from bombings during the Troubles and has now been restored yet again – this time as a much more inclusive headquarters for Derry City Council.

The High Victorian building, built in 1890, has been truly opened up with a direct route through from the front on Guildhall Square to the rear. There, in a brilliant gesture to the public, a new terrace cafe has been installed overlooking the River Foyle and its serpentine Peace Bridge. It could not be more different to the dark days.

The £8 million (€10.3 million) renovation, overseen by Consarc, has won joint first place in the Irish Georgian Society’s Conservation Awards along with a complex project in Blackrock, Co Dublin, by McCullough Mulvin Architects, involving the Carnegie Library, the old Town Hall and the former Municipal Technical School.

The awards, presented last night at the society’s headquarters in the City Assembly House on South William Street, aim to recognise significant projects involving the conservation of historic buildings in Ireland. Awards in previous years have gone to large or small houses, churches, civic buildings, follies and Victorian glasshouses.

What impressed the jury (which included myself) about Derry’s Guildhall was not just the internal spatial rearrangement, but also the meticulous work done to the exterior in rebuilding its ornate gable, which had been leaning outwards, as well as complete repointing of the stonework and restoration of the stained glass windows.

Fellow juror Dr Eddie McParland noted that all of the cement pointing from repairs carried out after bombings in the 1970s had been replaced with lime mortar, coloured to match the sandstone. “The recarved stonework was excellent, lots of original details were kept and the original ceiling of the council chamber was revealed.”

Incorrect diamond-shaped leaded glass was removed and replaced with more appropriate “cathedral glass”, as project architect Bronagh Lynch explained. The stained glass restoration was overseen by Stephen Calderwood, who had last worked on them with his father Jack after they were badly damaged by the bombs.

The council chamber has been reinstated under the Victorian vaulted ceiling, but in a contemporary style. “Other rearrangement of the original spaces was thoughtful and practical, such as the new lift,” as McParland observed. “Serious structural work to the front facade was well done – both inconspicuous and effective”.

The Blackrock College of Further Education, as it’s now called, was a labour of love by Valerie Mulvin, of McCullough Mulvin Architects; she had been nursing the project through various tribulations (mainly to do with financing) since 1998. And finally, it is functioning alongside the once independent township’s refurbished Carnegie Library.

As with the Guildhall in Derry, the work here was on a very large scale, and to a complicated brief that involved taking out the old Blackrock Urban District Council chamber in its entirety – in a single operation, done by crane – and relocating within the former technical school at the far end of the site on Newtown Avenue.

A new “bookend” in a modern idiom, with a huge window giving light to an atrium, was added to the northern end of the Edwardian neo-classical grouping as if to signal its transformation. “There is a great sense of excitement in the new work, involving justifiable alterations and rethinking of internal spaces,” McParland noted.

In effect, the new college wraps around the library on three sides, incorporating some very fine rooms from the earlier buildings – all brightened up by white paint and lime-washed floors. Decaying plasterwork on their front facades (and inside) has been expertly repaired by Collen and the original profiles reinstated.

The jury highly commended two other major conservation projects – the Royal Belfast Academical Institution, known as “Inst”, which has had its entire facade restored by Alistair Hoey Architects, and the restoration of the West Wing of Russborough House, near Blessington, Co Wicklow, by Howley Hayes Architects.

In the case of Inst, project architect Peter Robinson told us that the work involved replacing no less than 8,000 bricks – but you’d be hard put to tell the new from the old because the replacements were so carefully selected. The original pilasters, so characteristic of the building, were so decayed they had to be replaced too.

At Russborough, project architect Fionnuala Hayes explained that the West Wing – once the home of Sir Alfred and Lady Beit – had to be dried out after its walls became saturated from water used to put out a 2010 fire in the roof. And despite this huge setback, the building has been successfully restored for short-term lettings.

The work involved remaking the former stable block as two very well-furnished apartments; much of the furniture, including an elaborate monogrammed bed, once belonged to the Beits. Original features, including elements of the stables, have been retained and reworked in what the jury saw as a highly respectful restoration.

As McParland noted, both the Derry Guildhall and Russborough West Wing projects involved making good damage caused by external forces – bombs and fire, respectively. “What impressed me was a sense of conservation restoring the balance between willful destruction on the one hand and tragic accident on the other.”

A separate award went to Coleman Architects for an original drawing of Boyle Mill, in Co Roscommon.