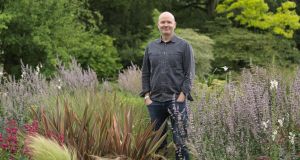 It was back in 1993, as a young goldsmith recently arrived in Stuttgart to take up an apprenticeship with the master goldsmith Gerald Heinrich, that Kilkenny-born Des Doyle – a keen gardener – had what could be described as a eureka moment.

“I kept spotting the most amazing public planting schemes throughout the city, using great swathes of ornamental grasses and perennials – species of panicum, rudbeckia. miscanthus,  perovskia, asters – that were entirely unfamiliar to me at the time. It was a revelation.”

As his career as a successful goldsmith unfolded over the following decades, Doyle’s interest in garden design continued to grow, with the latter increasingly informing and inspiring his work as a jeweller.

Discovering that the two creative disciplines share much common ground, including a deep understanding of form, line, colour, texture, proportion, balance and rhythm, Doyle found himself increasingly fascinated by the work of some of the world’s greatest plantspeople and garden makers including Beth Chatto, Cassian Schmidt, Olivier Filippi, Karl Foerster and Derek Jarman.

“I was really lucky that my work as a goldsmith took me all over Europe [including a stint in London collaborating with the late, great fashion designer Alexander McQueen], and allowed me to visit so many extraordinary gardens, both public and private. Whenever I had an afternoon free, off I’d go.”

Fast-forward to 2020 and Doyle is no longer a practicing goldsmith, his career cut short by a repetitive strain injury to his shoulder, an unfortunate consequence of his work as a jeweller.

In its place is a burgeoning career as a garden designer and teacher, a role he clearly relishes. His increasingly popular gardening workshops and masterclasses take place throughout the year at Lavistown House, the handsome Georgian farmhouse in rural county Kilkenny where he lives with his wife family.

It became the Doyle home in 2013 after his parents-in-law, the botanists Roger and Olivia Goodwillie who bought the property in the mid-1970s, moved into its converted stable-block, allowing Doyle, his wife Claire and their young son and daughter to take up residence in the main house.

That generous change of guard gave Doyle the opportunity to put his own mark upon the property’s charming country garden with its rolling lawns, shrubberies, flower borders and collection of choice trees.

His earliest horticultural experiments included an extravagantly lush and colourful tropical-style border – “I decided that it was just too labour-intensive and time-consuming with a very short period of interest” – while the undulating, curling paths and lawns around the house were gradually replaced with clean, sharp lines edged in steel. “I really like the elegant geometry of formal gardens”.

But it was only in 2014, after Storm Darwin toppled many of the wonderfully mature trees growing close to the house, that Doyle really began to make his mark.

“I remember walking outside and being faced with this scene of utter devastation . . . Seventeen full-grown trees including beech, all lying at a 45-degree angle with their giant rootballs wrenched right out of the ground. The same with the beautiful magnolias that I’d planted amongst them, all in full bloom.”

Some would have given up in despair at this point. Instead Doyle spent months painstakingly clearing the site of its fallen arboreal giants and then laboriously bringing in hundreds of tonnes of soil to backfill the wide craters left in the ground by their violently uprooted root systems. By the time he’d finished, he’d come to the realisation that their loss, awful as it was, had presented him with the opportunity to create a new and radically different sort of garden.

Gone was the dappled shade created by their vast leafy canopies. Gone, also, were the design restrictions of the site inevitably imposed by that same shade and by the trees’ spreading, hungry root systems. Instead, Doyle had that great luxury of an almost blank canvas, a very large, sunny open space set against the backdrop of Lavistown’s charming walled kitchen garden and the rolling Kilkenny countryside.

His first bold statement, a spontaneous purchase made during a visit to a local salvage yard, was the installation of a formal circular pool in the centre of the newly cleared site. “I just knew that it would be perfect.”

It was at this point that his good friend, fellow gardener and neighbour Susan Mosse of Kilfane Glen, whom he says has done much to help hone and refine his eye as a garden designer, asked him ‘So what comes next?”

What came next was the gradual creation of a modern Irish country garden that succeeds in being an entirely comfortable blend of the historical and the contemporary. Lavistown’s circular pool, initially marooned within a dull expanse of lawn, is now surrounded by a strikingly beautiful gravel garden filled with a very carefully edited mix of sun-loving, drought-resistant, pollinator-friendly perennials and ornamental grasses alongside a handful of evergreen shrubby species.

Instead of the traditional mixed border where plants are typically grown cheek-by-jowl, its planting style is airy, light and open, using a colour palette of misty greys, silvers, purples, dusty pinks and sage greens.

Most of the plants were sourced (often online) as plugs from a handful of Doyle’s favourite nurseries including Dublin-based Mount Venus (he’s a great admirer of the work of its owners, Oliver and Liat Schurmann), UK-based Edulis, Shire Plants, Beth Chatto Gardens (its innovative gravel garden continues to influence a new generation of gardeners and designers), and Sunsister, the Dutch nursery that specialises in salvias.

Just as intriguing is the horticulture underpinning this gravel garden’s design, one that deliberately avoids the traditional use of fertilisers and regular rich mulches of organic matter in favour of a poor, free-draining, stony soil amended with carefully calibrated quantities of horticultural grit, gravel and sand added to each planting hole.

Rather than leaving areas of bare soil exposed to the elements, the ground is covered with a surface mulch of pebble to a depth of anywhere between 5cm-12cm deep. The aim, Doyle explains, is to grow the plants “hard”, forcing them to develop deep, robust root systems and preventing the lush, soft, disease-prone, floppy growth caused by a too-ready abundance of nutrients.

This in turn avoids the need for ugly staking and the never-ending battle against opportunistic weeds while plants grown this way are also typically far more resilient to weather extremes including winter flooding, late frosts and drought.

Indeed, Lavistown’s gravel garden is so remarkably maintenance-free that he lightly weeds it just once a year in early spring and never waters it. Instead the pebble/gravel mulch acts as a protective blanket that helps to preserve soil moisture and moderate soil temperature while inhibiting the germination of weed seeds.

As for any plants with a tendency to self-sow, Doyle just keeps a benign eye on them, editing the baby seedlings as required. The result is that very rare thing; a garden that is ultra low-maintenance but also dynamic, self-sustaining, and very beautiful.

“I think the challenge for any gardener is making the planting work in a way that’s sustainable and enduring” says Doyle. “I wish more people knew that gravel gardens like this really are a wonderful solution.”

(See gardenfable.com for more details of the upcoming gardening courses and workshops being held at Lavistown House)