With work cancelled, Gemma Tipton found herself helping out with a cottage and stables renovation 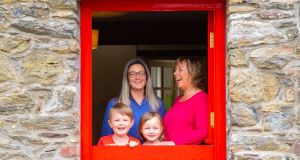 I’m one of those people who has always found a simple question trckier than it ought to be: Where do you live? Answer: Mostly in Co Cork, often in Dublin and, it sometimes seemed, mainly in my car.

How things change. Back at the end of last year, when lockdown was just a malevolent gleam in the eye of the future, I was working on a festival, and was soon looking for a place to stay in west Waterford. Remember festivals? The West Waterford Festival of Food is a lovely event and, right up until March, it had still seemed possibly possible.

On a dark November afternoon, I visited friends who had recently moved to Lismore, realising their dream of a rambling house with gorgeous gardens and a pair of tumbledown cottages on site.

We walked down to the Garden Cottage, with its thick stone walls, huge iron pillars supporting a massive ceiling beam, and an enchanting yet faded red stable door. It also had a particular air of damp decrepitude.

John Curnow is a landscape gardener, and while I wasn’t sure I entirely believed him about the timeline, I was soon to discover there’s not much he and his wife, Jess, can’t make happen – usually by getting stuck in and doing it themselves.

The cottage was full of problems. Flowerbeds had been banked too high against its walls and, at some point, a second storey had been added, shored up by massive stone buttresses, and inadequately sealed and pointed. So the land around it was excavated back to make way for a French drain, and various bits of essential structural work done – which always makes things seem far worse for a while.

Jess phoned me one relentlessly wet December day to say she was painting the inside, and that everything was so damp, the paint was simply sliding off the walls. I went down to help, and I stayed, off and on, until Lockdown added an unanticipated permanence.

Just on the edge of Lismore, Headview is a little piece of heaven. The house itself is Victorian, and the gardens include a walled vegetable garden (fronting on to the Garden Cottage), a cobbled courtyard for the second, Dairy Cottage, and a stable yard, which was soon to play a starring role.

The Curnow children, aged four and five, turned out to be dab hands at painting skirting boards. Decent heating, and a solid fuel stove dried out the walls. New kitchen units went in, and the ancient spider infested range was regretfully discarded.

Jess has a great eye for colour, and also for upcycling. Old sofas were recovered, and tables sanded back to beauty. As the days lengthened, things became cosier, and I was able to shed layers of sweaters and socks, and watch the gardens come to life around us. But the news from the rest of the world wasn’t good. The strange virus in China got a name, and grew worryingly close. The Festival was inevitably postponed, and there was talk of Lockdown.

Then my horse got sick. Bosco is an elderly racehorse, who was never very good at racing, and like many thoroughbreds, while beautiful, he has his delicate moments. He had stayed in Co Cork, and I had been going to and fro. But now the vet was prescribing box rest, and medication three times a day. I experienced one of those moments of utter helplessness.

Buying an old house, where the sheds are stuffed with generations of abandoned broken things, may be a hugely daunting prospect

The fact that the old stables had long ago been converted into sheds, and were full of years worth of “shed stuff” appeared to be no barrier. Over a long weekend, we removed paint tins, tennis racquets, an old croquet set, falling apart picture frames, broken buckets and many many cans of nameless goo.

John took apart a dilapidated snooker table, which was never going to see smooth baize again, and reinforced the crumbling partition (how many horses have a teak stable?). He sawed the door in half, adding a piece of cut up drainpipe to make safe the raw edge. “Mackle it up,” is a favourite phrase that I have grown to cherish.

Buying an old house, where the sheds are stuffed with generations of abandoned broken things, may be a hugely daunting prospect. But in times of minor crisis, having a wealth of potential building materials to hand is a joy.

Once cleared, the stable was finished in two days flat. We repaired the old floor by adding sand and cobbles – found around the grounds. The kids jumped up and down repeatedly to bed them in. Next door became a tack room (which also these days doubles up as The Tack Room Bar), and off we went to collect Bosco.

The Irish countryside has great community. On box rest for at least a month, Bosco would need hay, but who has hay at the end of a long winter? A friend called a friend, who suggested I call someone else. The Someone Else said “leave it with me.” “I don’t want to be any trouble,” I said. “I mean, you don’t know me and you don’t know my horse.” “But he’s a horse and he needs help,” said the Someone Else.

Eventually I found myself speaking to Dave.

“I don’t have enough hay to sell,” said Dave. My heart sank. “So I’ll give you some,” he continued. Hitching up a trailer, and calling via the off-licence, I picked up a bottle of Powers and went to swap it for a round of lovely sweet-smelling hay.

Three days later, pretty much everything, except the virus and those working so hard to battle it ground to a halt. Can you say you’re lucky in such circumstances?

Looking back, I feel incredibly fortunate to have had lockdown in Lismore.  I stopped planning and just enjoyed the moment. I helped the kids with their Irish and long walks with them by the Blackwater, naming the colours and yelping “madra” when we see one.

We  also cracked on with the Dairy Cottage: a very sweet three-bed, that will soon be available via AirBnB. Like any renovation, as I’m discovering, the Dairy Cottage has had some tricks up its sleeve.

A poorly laid pipe had done an exceptional job of softening up some floorboards, and there was the set of doors we couldn’t quite work out until we realised they’d been hung upside down. But they were quickly fixed, and it’s taking shape. There’s a lovely old-fashioned bath, with views of the surrounding corn fields, and the kind of lofty-beamed bedrooms that make you feel as if all is right with the world.

We’ve just finished the painting and polishing, and the Dairy Cottage is now ready to rent. Like most of the country, I’m so thrilled the day has finally come.

Share your renovation story
Have you recently refurbished your home or built one from scratch? If so, we’d love to hear how you got on. Please get in touch by emailing homeanddesign@irishtimes.com