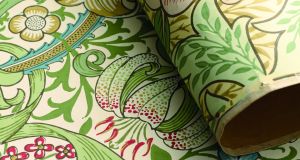 Visiting a friend’s house recently, I was blown away by the wonderful wallpaper adorning her freshly decorated guestroom. This, I should add, was no ordinary wallpaper but an exquisite design called ‘Golden Lily’.

First produced in 1899, it comes from the textile design studio Morris & Co, established in the Victorian era by the brilliant British designer William Morris, who was part of the British Arts and Crafts Movement.

A complex pattern of intertwining lily flowers, stems, tendrils and leaves, it is not in fact the work of Morris himself but of one of his most talented protégées, a man by the name of JH Dearle, who went on to produce many other beautiful designs for the firm during his lifetime.

Morris himself frequently looked to nature for inspiration for his own exquisite creations for the firm. One of his earliest wallpaper designs, ‘Daisy’, created in 1864, uses a pattern of wild daisies.

Many of the plants that feature in the textiles Morris designed also grew in the garden of his family home, Red House in Kent.

This famous house, which he designed with his friend, the architect Philip Webb, was described by the poet and artist Dante Gabriel Rossetti (another friend) as “more poem than house”.

Indeed, Morris was such a keen gardener that during the construction of the house he went to great pains to preserve the trees growing on the site, while the garden he created was known for its wonderful abundance of fruit and flowers.

Both house and gardens survive to this day and are now managed by the National Trust. The firm he established also survives, and is proof of the enduring worldwide popularity of Morris & Co’s elaborately beautiful designs.

Which makes it all the stranger to discover that during his lifetime, Morris was more famous as a poet than as a designer. While his poems are mostly typical of a morally bracing and melodramatic, Victorian high-mindedness – “I am Day; I bring again Life and glory, Love and pain: Awake, arise! From death to death” – that now seems terribly old-fashioned, Morris & Co’s botanically-inspired textile designs have a timeless quality that makes them classics.