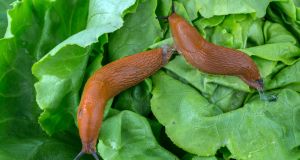 There are ways to deal with slugs which don’t involve nasty chemicals. Photograph: Wodicka/ullstein bild via Getty

Black spot on the roses, vine weevils damaging container-grown plants, slugs devouring treasured dahlias, woolly aphids infesting our most prized garden trees . . . There was a time when the typical Irish garden shed was filled with an arsenal of nasty chemicals that we happily reached for at the first sign of any of these common garden pests and plant diseases. But as awareness of the long-term, far-reaching consequences of their use continues to grow, so too does our increasing reluctance to employ them.

That’s all very fine, some might say, but what are the organically friendly alternatives? The answer to that question- or at least a very big part of the answer- is that prevention is far better than cure. In particular, healthy soil is the beating heart of a healthy, happy garden and the secret to growing healthy, happy plants that can comfortably shrug off attack from pest and diseases. So do everything you can to nurture and protect yours with the regular addition/use of homemade compost, leaf mould, well-rotted manure, green manures and other amendments such as dried seaweed powder.

Soil aside, make sure to give your plants the kinds of growing conditions that they prefer. That may sound glaringly obvious, but it’s surprisingly easy to convince ourselves that we have the very spot for a much-coveted specimen when the uncomfortable truth is that we don’t.

So for example, don’t put a plant that requires an open position, full sun and a fertile, free-draining soil into a damp, shady, confined spot where it will briefly but valiantly struggle to grow before gloomily succumbing to pests and diseases.

Similarly – messy gardeners like me, take note – try to make a point of practising good garden hygiene. So avoid leaving “dumps” of recently pulled weeds/plant clippings/ empty pots/ garden debris to attract slugs and/or spread disease. Likewise, try to make a habit of repotting container-grown perennial/shrubby plants every spring as a way of disrupting the life cycle of common pests such as vine weevil or lily beetle that may be overwintering in the compost, making sure to bin the old compost rather than re-cycle it.

Fallen leaves of infected plants can also harbour plant diseases (examples include those of roses infected with blackspot or apple trees infected with scab) so try to regularly collect and burn these. For the same reason, practise crop rotation in the kitchen garden/allotment and if/where it’s a recurrent problem, net/ fleece vulnerable crops against common pests such as carrot fly, flea beetle and cabbage-white butterfly. Encouraging natural predators such as birds, hedgehogs and beneficial insects including ladybirds, lacewing larvae and hoverflies into your garden by providing them with suitable host plants/habitats in which to overwinter will also help keep garden pests down.

Finally, it is wise to be vigilant as regards the risk of accidentally introducing pests and diseases as sneaky stowaways lurking on the foliage or in the compost/ soil of newly-acquired plants. Classic signs include discoloured/ disfigured/nibbled leaves as well as larvae/eggs concealed in the growing medium, a favourite route for vine weevil, lily beetle and aquilegia sawfly.

I’d be a liar if I promised you that the result of all this effort will be a garden/allotment entirely free of pests and diseases but it will certainly do much to minimise their spread as well as the damage that they cause. As for those times when more hands-on measures are called for, here’s what I’ve learned….

Slice them in half

Slugs (or at least the kinds I’ve come across) are not remotely deterred by crushed egg shells/coffee grinds/wool pellets/polite requests to leave the premises. Instead, I use a scissors/snippers to slice them in half and squash their clusters of tiny, transluscent eggs whenever I find them. Yes, it’s a little yuck but I like to think they’d prefer it to being poisoned. That said, I do occasionally use organically acceptable, iron phosphate-based pellets as an additional control while other organic gardeners use biological controls such as Nemaslug (both are available from most good garden centres).

I follow the same simple principle of ‘catch ‘em/squash ‘em/slice ‘em’ when it comes to vine weevils, flatworms, lily beetles, garden snails and cabbage white caterpillars, but many organic gardeners have had success using biological controls such as Nemasys or Supernemo to control vine weevil or Bacillus thuringiensis to control cabbage white caterpillars.With common plant diseases such as rose black spot/mildew, I’m happy to tolerate these unless they become a serious and long-term problem on a particular plant, in which case I’ll conclude that it is an especially vulnerable variety and get rid of it. Potato blight? I don’t spray but grow mainly early/blight-resistant varieties, cutting back the foliage at the first sign of infection.

I don’t have a problem in my own garden with scale insects, thrips, mealy-bugs or aphids but many urban gardeners do. In this case, your organic options are to tolerate them or to wash the affected areas down with a natural soft soap such as ‘Uncle Tom’s’, available to order from Cork-based Fruithill farm (fruithillfarm.com).

The same firm also supplies a host of other organically-acceptable pest/disease controls and deterrents including biological controls, traps and crop covers. But what you won’t find listed among its many products are the sorts of nasty garden chemicals that once upon a time filled the shelves of the average Irish garden shed.

(For a more detailed guide to identification/organic control of  garden pests/ diseases, see gardenorganic.org.uk and .bbc.co.uk/gardening/advice/pests_and_diseases/ )

* While plenty of nitrogen-rich green material from the garden is often being added to the compost bin at this time of year, it’s very important to intermix this with layers of carbon-rich material such as dried leaves, straw and cardboard to prevent the heap from turning sour. A biological activator such as Compost Renew (available from quickcrop.ie) can also help kick-start/ accelerate the process.

* While gardeners were once advised to prune box twice a year (May and September), the threat of box blight means that it’s now preferable to prune just once in July to reduce the risk of infection entering plants through fresh pruning cuts. This nasty fungal disease, which causes defoliation and eventual death of the plant, spreads most quickly in damp, humid conditions so only trim plants on dry, sunny days, using a sharp, clean shears. Once finished, remove and burn all clippings (place a sheet/ plastic on the ground before clipping to make collection easier). If you have a box hedge that’s already showing signs of infection, then regular applications of the fertiliser known as ‘TopBuxus’  (available from most good Irish garden centres) is an excellent, organically-acceptable remedy/ tonic.

*Keep control of weeds by regularly hoeing bare soil and adding garden mulches to suppress germination of any seeds hidden in the ground. Where time is short, even a few minutes spent deadheading already-established weeds will help by preventing them from setting fresh seed.

Dates For Your Diary:

Readers on sibling bullying: My tormentor was there every day . . . waiting
7

Ask the Expert: Nine-year-old son still sleeps in my bed
8

A play about sex work: ‘I want people to come out of the theatre angry’
9

Sack farming in Uganda waits for no rain
10