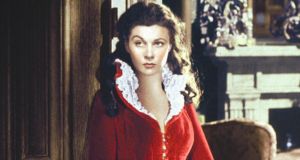 Vivien Leigh in a publicity portrait issued for ‘Gone with the Wind’: Sotheby’s is to auction approximately 250 pieces of the actor’s memorabilia with estimates ranging from £100 to £100,000. Photograph: Silver Screen Collection/Getty Images)

Gone With the Wind star Vivien Leigh’s collection of art, antiques and film memorabilia is to be sold at auction in September. Sotheby’s said approximately 250 lots will be offered for sale with estimates ranging from £100 (€113) to £100,000.

Vivien Leigh was one of the most famous film stars of the 20th century and won Oscars for her performances as Scarlett O’Hara in Gone With the Wind (1939) and Blanche DuBois in A Streetcar named Desire (1951).

She was born in India during British rule in 1913 (her Irish grandmother was Mary Teresa Robinson) and died of tuberculosis, aged just 53, in 1967 at her home in Eaton Square in the Belgravia district of London. She was married and divorced twice – most famously to the renowned English Shakespearian actor Laurence Olivier. She and Olivier were married in 1940 and divorced in 1961. He outlived her and died, aged 82, in 1989. Because Olivier was knighted in 1947, she acquired the title of Lady Olivier although few knew her by that designation.

Lord Dalmeny, Sotheby’s UK Chairman, described Leigh as “the most glamorous and talked-about woman of her age”.

She achieved global fame following the huge success of Gone With The Wind – one of the most popular films ever made in Hollywood. The film was based on a bestselling novel of the same name by Margaret Mitchell published in 1936 and set in Georgia during the American civil war. Leigh played the part of Scarlett O’Hara, the heiress to Tara, a cotton plantation in Georgia. The leading man, Rhett Butler, was played by Clark Gable. Sotheby’s said the auction would include Leigh’s personal copy of Gone with the Wind, given to her by the author (£5,000-£7,000); and the title’s film script, presented to Leigh by members of the cast, with photographs, circa 1939 (£2,500-£3,500).

The auction also includes paintings, jewellery, couture, books, furniture, porcelain and objets d’art from the pre-war years in London, to Hollywood and beyond, including from the city and country homes she shared with Olivier.

Mental health: How to mind yourself during the shut-down
2