Upward trajectory continues on The Rise 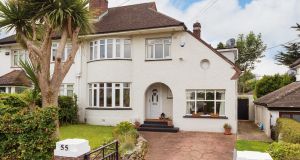 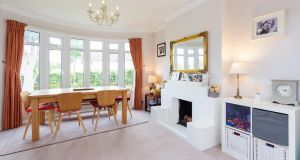 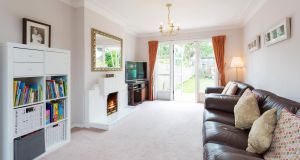 The first houses in Mount Merrion built by John Kenny were advertised as “dream homes”, with mod cons including plenty of electric sockets and “labour-saving” kitchens for new servantless homes. That was the 1930s, and locations such as The Rise, Mount Merrion, have had a cachet since then.

Accommodation downstairs in number 55 includes an interconnecting livingroom/diningroom stretching from the front to the back of the house, a separate kitchen and a tiny understairs toilet. The livingroom/diningroom is a bright space, with the bay window at the front and a glazed door at the other end opening into the garden. A wide arch is all that separates the two rooms, which have distinctive art deco-style tiled fireplaces. The modest-sized kitchen has white units.

There’s a tiled family bathroom off a half-landing upstairs which opens into a utility/storage area plumbed for a washing machine. There are four bedrooms – two singles and two doubles – on the top floor. The main bedroom, like the livingroom below, has the bay window typical of Mount Merrion houses.

There’s a separate entrance – up two steep steps, a challenge, depending on the granny  – from the side of the house into the small flat which has a kitchenette, small shower room and toilet and down a couple of steps, a bed/sittingroom.

The long back garden is mostly in lawn, with a reddish concrete patio across the back of the house. There’s room to park in the paved front driveway.

Number 55 is near the corner of The Rise and Greenfield Road, a reasonably short walk from the shops, restaurants and church in Mount Merrion.