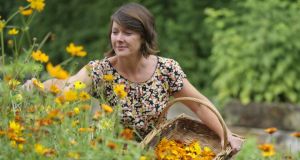 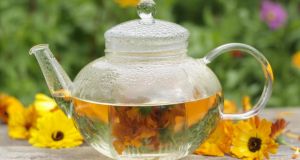 An infusion of Calendula flowers

Of all the plants that I grow in the garden, there are a few that are particularly dear to my heart. Among them are pot marigolds (Calendula officinalis), for their fiery, edible flowers that light up the kitchen garden in summer and early autumn, attracting many of the different beneficial insects so vital for the successful pollination of crops.

Another favourite is rosemary (Rosmarinus officinalis), for its deeply aromatic, resinous foliage (delicious tossed in hot oil alongside roasting potatoes), and those tiny tubular blooms so beloved of bees. Also oregano (Origanum vulgare), for its clusters of blooms that are an irresistible lure for tortoiseshells, peacocks, red admirals and other once-common butterflies.

These kinds of plants aside, there are others – weeds such as chickweed, dock and dandelions – that I’ve always found it much harder to love. These are the bane of the garden, self-seeding with such profusion that I spend my time cursing them, hand-pulling them, hoeing them, yet never quite winning the battle.

But after talking to the Cork-based medical herbalist Kelli O’Halloran last week, I’ve been reminded of the fact that I’m in need of an attitude adjustment. The common dandelion, (Taraxacum officinale) for example, may well be one of the gardener’s most persistent weeds – those giant tap roots make it a difficult plant to eradicate – but it also has a host of valuable medicinal properties.

Its young leaves can be used to make a tea with potassium-saving diuretic properties, useful for treating people suffering from high blood pressure. Consumption of the bitter leaves will also aid digestion and act as a general laxative, while eating the ground root helps detoxify the liver. Even the sticky, milky- white latex contained within its stalks can be used externally to kill warts and veruccas, something I once knew as a small child, but had somehow or other since forgotten.

“That’s quite typical of a younger generation of Irish people,” explains O’Halloran, who studied chemistry in Tralee before eventually moving to London to complete an honours degree in herbal medicine at the University of Westminster. “That knowledge of plants and their medical properties is our rightful heritage, but somehow or other we’ve almost lost it, or been indoctrinated against it to the point where we see it as hocus-pocus. It’s very different to older generations like my grandmother’s, who grew up with a real respect and appreciation for wild plants and their curative powers.”

Used wisely, these plants form a natural pharmacy, especially useful in a time where so many people suffer from what O’Halloran calls “recession illness” – her term for the sort of long-term stress that is a result of too little money and too little personal time. “Despite our modern lifestyles, our bodies still operate on the fight or flight rule. Forced to deal with a stressful situation for too long, we become adrenally exhausted, our cortisol levels and blood pressure rise, our immune systems become depleted.” The result, she adds, is ill health and all the symptoms that accompany that. “Sleep and mood disturbance, exhaustion, severe anxiety, skin disorders, disturbance of the digestive system, to name but a few. I see a lot of what I call paddling ducks, people who are working every hour of the day simply to service their mortgage. ”

Along with a host of wild plants – plantain, nettle, scutch/couch grass, chickweed, dock, cleavers, dandelion, hawthorn – foraged from the hedgerows and seashore, O’Halloran uses a panoply of common garden plants in the different tinctures, oils, infusions, creams and balms that she makes for her many patients. Among them are lavender, rosemary, oregano and the oh-so-versatile pot marigold, which has long been valued in herbal medicine for its healing, cleansing, anti-inflammatory and detoxifying properties. “It’s what I describe as one of my desert island, go-to herbs, a plant that I simply couldn’t do without.”

While a variety of useful recipes are available from O’ Halloran’s website (kelliohalloran.com) it’s important to note that if you are suffering from a long term medical condition, certain allergies, are pregnant or taking any other medications, you should always consult a medical herbalist before taking any such herbal remedies.

Stand in a warm place and shake daily for two weeks. Filter and store. Taken internally as a tincture (5-20 drops in water, three-times daily), this has anti-viral, anti-bacterial, anti-fungal and immune-stimulating properties and has a policing action on the lymphatic system, which is why I often use it as an adjunct in cancer treatment. It’s also useful as a treatment for scant/painful periods or varicose veins.

What is the going rate for a home in Co Donegal?
4

Rambling house on the Hill in Monkstown for €1.95m
Real news has value SUBSCRIBE