How to add gorgeous greenery to your home this Christmas 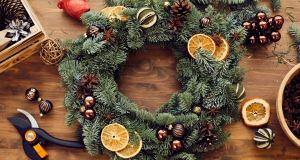 A Christmas wreath made mainly from native species, or foliage grown locally, is one of the most sustainable ways to decorate. Photograph: iStock

In early December of 2019, Laurie Pressman, vice-president of the world-famous, trend-setting Pantone Colour Institute, proudly declared to the world that “classic blue” would be its 2020 colour of the year.

Hindsight, of course, is a wonderful thing. Who ever could have guessed that there was a global pandemic on its way or that when we look back on this very odd, challenging and in many strange ways transformative year, it won’t be the colour blue that best embodies it (except perhaps as an indicator of the nation’s mood) but instead the colour green.

The freshly hatched, miraculous baby green of a tray of newborn seedlings back in lockdown #1, for example, when it felt the world as we knew it might be about to end.

Or the soft, apple-green of Irish gardens bursting into new leaf in what turned out to be the loveliest, if eeriest, of springs. The box-fresh green of early summer’s freshly mown lawns when together we took a collective deep breath and tentatively emerged from our homes. Or the late-summer, burnished golden-green of the wild grasses that flourished in cracks in city pavements and along our roads and motorways, their growth for once unhindered.

Green, of course, represents life and hope, regeneration and rebirth. It’s why so many of us have been strongly drawn to our gardens and the outdoors throughout this pandemic and why we also traditionally decorate our homes with fresh greenery at this time of year when days are at their shortest and nature’s pulse is at its slowest.

Examples of traditional Christmas evergreens include Ireland’s own native ivy (Hedera hibernica), which has long been symbolic of immortality, fidelity and tenacity (if you’ve ever tried removing it from an old wall or building, then you’ll know too well how stubbornly it clings).

Likewise holly, another native evergreen, was traditionally believed to have protective powers and to ward away evil, the reason why it was often planted close to people’s homes or farm buildings.

Other examples include the non-native semi-parasitic plant known as mistletoe (Viscum album or drualas, to give it its Irish name), which has long been seen as a symbol of fertility, immortality and healing. Similarly the pine tree traditionally used for Christmas trees as well as for Christmas or Yule logs was believed to ward away evil and ill health while the native yew is considered a symbol of eternity and good luck.

These traditional Christmas evergreens aside, there’s a wealth of other evergreen plants often found growing in Irish gardens that can be used to decorate the home at this festive time of year. Examples include eucalyptus, pittosporum, ozothamnus, Scots pine, rosemary, bay laurel, fir, heather, sarcococca, juniper and ruscus, many of which are also highly aromatic.

A simple garland, swag or wreath made from any of the above is one of the loveliest, most sustainable and most meaningful of ways to mark the season. Alternatively, to add a contemporary twist, consider creating a hanging/suspended Christmas-themed evergreen installation using any/a mix of the above attached by wire or string to a garland of rope (great for a stairway) or a length of flexible piping such as oil line or insulated copper pipe. The latter, widely available from good hardware shops, has the advantage of being easily bent into any rigid shape you might want. Wrapped in a soft layer of moss, it can then be used as the concealed scaffolding for larger-scale seasonal arrangements that require some form of rigid support. It’s also re-usable; simply strip away the faded foliage at the end of Christmas and store it away somewhere safe for the following year.

To give a little more textural or sculptural interest to your seasonal, evergreen Christmas arrangements, you could add dried flowers (for reasons of sustainability, try to source Irish-grown or use your own, good choices include honesty (Lunaria), strawflowers (Helichrysum bracteatum), hydrangeas and the silver plumes of pampas grass (Cortaderia selloana), as well as ornamental seedheads (examples include nigella, opium poppy and teasels), berries, pine cones and the elegantly twiggy branches of deciduous trees such as larch, contorted willow and contorted hazel. For a little extra Christmas bling, add some battery-powered fairy lights.

Alternatively, you could use one or two of those same bare twiggy branches (or some very large stems of dried lunaria) as a simple but very ornamental scaffold/ rigid support from which to suspend a variety of individual dried flowers, seedheads and cones. For best results, use the very fine-gauge floristry wire known as bullion wire, which is available in a range of colours from good floristry suppliers and some hardware stores, to do this. Placed at a height above the Christmas table or in a hallway (make sure that it’s safely out of reach of any candle flames), it will make an enduringly beautiful seasonal arrangement for the weeks ahead.

Which brings me to my last few words of advice: don’t be at all surprised to find yourself falling so in love with your hand-fashioned seasonal Christmas decorations that you’ll be loathe to ever take them down. You have been warned…