From cosmos to dizzy dahlias, the flowers to grow now for summer magic

If you have a sunny spot to spare, these are the flowers to plant out 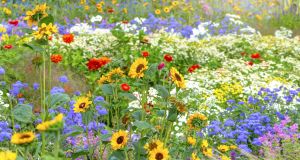 Invest in just a few packets of seeds and tubers of summer-flowering varieties over the coming weeks and you’ll be astonished by the abundant beauty they’ll bring you, right through to late autumn. Photograph: Getty Images

Myself, much as the thought of telekinesis is appealing (just think how wonderfully easy it would be to spread manure), I’m enduringly grateful for the magic that comes with gardening, not least of which is being able to grow and pick armfuls of seasonal, sweetly-scented, homegrown, cut flowers. This spring I’ve harvested tulips, anemones, ranunculus and narcissus, all grown from bulbs, claws or corms planted in autumn. Exquisitely beautiful, they’re just some of the many different kinds of cut flowers that can be grown in Irish gardens. Try it for yourself by investing in just a few packets of seeds and tubers of summer-flowering varieties over the coming weeks and you’ll be astonished by the abundant beauty that they’ll bring you, right through to late autumn.

For best results, I suggest concentrating on a few ultra-productive, long-flowering varieties of half-hardy annuals, all of which can be raised from seed sown with gentle heat and under cover during the coming weeks, for planting outdoors after the risk of frost has passed. Examples include taller varieties of Mexican marigolds such as Tagetes ‘Cinnabar’, T. ‘Konstance’ and T. ‘Chameleon’. All have fiery-coloured flowers in shades of crimson, gold and ember-orange that are produced non-stop from mid-summer until the first hard frosts, and are perfect for cutting and bringing indoors. Just make sure to give the plants a weed-free, free-draining soil and a position in full sun.

Another must-have is amaranthus or Love-Lies Bleeding, as it’s sometimes known, a sun-loving half-hardy annual with hugely decorative flower tassels in shades of cinnamon, lime green and scarlet that make the perfect filler for a summer bouquet. I find the upright flowers of varieties such as Amaranthus ‘Hot Biscuits’ and A. ‘Red Army’ easier to use and more versatile than trailing varieties such as A. ‘Coral Fountain’ or ‘Emerald Tassels’ but many love the latter.

Cosmos is yet another half-hardy, ultra-productive, fast-growing annual that’s very easy to raise from seed sown at this time of year and which will provide armfuls of cut stems over a very long period. Its pretty, daisy-like flowers come in shades of white, pink, crimson, yellow and apricot including many different picotée types. Some are single while some are double (lots of petals); the former are best for supporting pollinator populations. Again, make sure to choose taller varieties for useful length of stem. Good choices include the white-flowered C. ‘Purity’ , ‘Fizzy White’ and ‘Psyche White’; soft-pink C. ‘Daydream’, and C. ‘Velouette’, whose dark crimson petals are streaked with white. Another sun lover, cosmos likes a moist but well-drained, not overly fertile soil and a sheltered spot. Regular deadheading is also crucial in order to encourage the plants to continue producing fresh flowers for as long as possible.

Many half-hardy varieties of rudbeckia also make excellent cut –flowers and their daisy-like blooms come in rusty shades of gold, bronze and caramel. Amongst the best are Rudbeckia ‘Sahara’; R. ‘Cherokee Sunset’ and R. ‘Cherry Brandy’. All like full sun and are happy in any ordinary, well drained, weed-free soil.

My work as a flower-farmer-florist has also taught me much about the great value of filler plants, which not only add precious froth and body to an arrangement but also texture and tone. An outstanding example is garden orach (Atriplex hortensis), the tall, fast-growing edible annual whose outstandingly decorative seedheads are glorious in a late summer arrangement and can also be used dried. Various mixes are available in shades of copper, rusty red, bronze, and lime green including Atriplex ‘Copper Plume’, ‘Green Plume’ and ‘Red Plume’. For best results direct-sow outdoors at this time of year and then thin the baby seedlings to a spacing of 25-30cm. Orach likes an ordinary, weed-free soil in full sun with protection from strong winds; in exposed sites give some form of staking or horizontal netting to protect the plants from toppling over in a summer gale.

Last but never least are dahlias, perhaps the most productive, most versatile and most beautiful of all summer-blooming cut flowers. Such is the dizzying range of varieties and colours available that it’s impossible to single out just a few. But make sure to choose those known for their long stems, productivity and resistance to rain damage. Amongst my own favourites in this regard are Dahlia ‘Wine-Eyed-Jill’ (smudged shades of peach, purple and pink); D. ‘Jowey Winnie’ (smoky pink); D. ‘Downham Royal’ (dark burgundy purple) and D. ‘Verrone’s Obsidian’ (soot red with a golden eye). To protect their soft, young, shoots from slug damage as they emerge above ground, it’s a good idea to plant the fleshy tubers into pots filled with a good multipurpose compost and grow them on before transplanting them outside after all risk of frost. Much like their tuberous relative the potato, dahlias demand a rich, moisture-retentive but free-draining soil in full sun. For best results, give them regular liquid feeds throughout the growing season and deadhead regularly.

With the exception of garden orach, all of the above cut-flower varieties should be nipped out (their growing tips removed) as young plants to encourage them to bush out. Remember also to harden them off before planting them outdoors by allowing them to gradually grow accustomed to cooler temperatures. Keeping young transplants well-watered and protected from slugs until they grow larger and have stretched their roots deep in the soil is also very important. So is harvesting your flowers either early in the morning or late in the evening, quickly stripping the lower leaves off the stems before plunging them waist-high into a bucket of clean, cold water and then leaving them to condition overnight in a cool, shady shed or hallway. Once arranged, try to keep them out of direct sunlight and refresh the water every couple of days for maximum vase life, which – depending on the variety – will be anywhere from 5-14 days.

*Recommended seed and tuber suppliers include mrmiddleton.com ; chilternseeds.com and all good Irish garden centres. For tips on raising plants from seed, see my column of March 28th. Kilkenny-based nurseryman Patrick Lydon has also established a new nursery specialising in young plants suitable for cut-flower production (contact him at  087 7972717 info@livingandgrowing.ie). Recommended books on cut-flower growing include Clare Nolan’s In Bloom and Erin Benzakein’s The Floret Farm’s Cut Flower Garden, both of which are available as ebooks on Kindle.