Make a grand entrance in Malahide for €1.85m 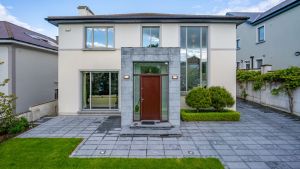 While we are all limited to exercising within a 2km radius of our homes in the current health crisis, people whose homes are within that distance to beaches are enjoying the freedom to ramble along Ireland’s sea shores.

Grove Lawn in Malahide is one such location. Just 600m from the beach and the town itself, residents in the locality are taking advantage of their proximity to the long stretch of coastline to keep exercise regimes and spirits up in this time of uncertainty.

“When I first came through the door I could feel that it had a great spirit and energy, and had the potential to be a super home. However, the wind howled through the old windows, and after the bad winter of 2009 I thought ‘I am not spending another winter like this’ and decided to renovate.”

Architect Albert Noonan of Noonan Moran was engaged to draw up plans for the house, which included an extension to the rear and a redesign of the interiors to maximise space and light. The project was then overseen by Emmett Tolan of Fingal Planning Consultants.

Works included digging down into the foundations to install insulation – this was also installed into the walls – and with the addition of triple glazed windows, the property now has a far more efficient BER of B2.

The entire house was rewired and re-plumbed, and has been transformed into what it is today – a light-filled 270sq m (2,906sq ft) property with expensive well planned interiors.

One of the initial suggestions of architect Albert Noonan was to replace a window – which from the exterior appeared symmetrical, but had no use internally – with one large aperture over two floors that now floods the custom-built staircase with light.

The house originally had five bedrooms, one of which was transformed into a large en suite and dressing room for the principal bedroom. “We moved the main bedroom to the back of the house to maximise the views. While our landscapers were here our neighbours asked them to chop down some old trees, so now we have views that we couldn’t  have imagined – we can now see down to the marina and over to Lambay Island.”

Polished Jura limestone runs through the ground floor in the kitchen, dining and hall areas – all of which are warmed by underfloor heating – with thick pile pure wool carpets upstairs.

The formal living room features an impressive Portuguese basalt fireplace from Buckley Fireplaces in Dublin, which is framed by a reclaimed Brazilian mahogany parquet floor.

The kitchen – remarkably bright thanks to an abundance of glazing – has solid cherry with a hand-painted Farrow and Ball finish. It was installed by Phillip Patrick of The Design Yard in Dungannon.

The detached property in turnkey condition is surrounded by meticulously landscaped gardens, which were designed to give all-year colour and minimal maintenance.

The property is now on the market through Sherry FitzGerald seeking €1.85 million.