Dating from 1700, it was in the collection of late Guinness heir Garech Browne at Luggala 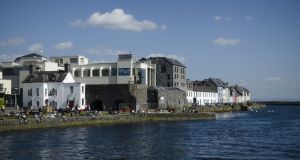 Galway City Museum lies opposite the historic Claddagh district in Galway. The ring will be showcased in the new Atlantic Museum extension in 2022 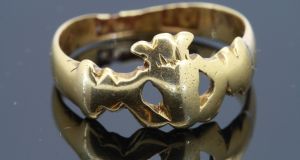 The oldest Claddagh ring known to exist was made by Richard Joyce of Galway circa 1700, and fetched £8,125 (€9,246) at auction in Sotheby’s. Galway City Museum, which bought the ring, is on a quest to establish the original owner

What is believed to be the oldest-known Claddagh ring in existence is on its way back to Galway having been recently purchased by the city’s museum.

The ring, thought to date from about 1700, was part of the collection of Claddagh rings owned by the late Garech Browne of Luggala in Co Wicklow. It was was sold at a Sotheby’s auction in February for £8,125 (€9,246) after a bidding war, having been expected to fetch up to £2,500.

It was purchased by Garret Weldon of the Dublin jewellery and auctioneering family; his father, Jimmy, originally sold the ring to Browne several decades ago.

It its fitting that the ring has been bought by Galway City Museum, as the piece was created by a Galway goldsmith, and the museum itself overlooks the city’s historic Claddagh district, from which the ring takes its name.

There is such folklore and legend attached to the origins of the Claddagh ring, it is hard to know where the myth ends and truth begins. But it is accepted that this tiny ring was made by Richard Joyce circa 1700.

Joyce is credited with the “modern” design of the ring, which is a modification of fede rings, popular in 12th-century Europe.

Records of his early life are vague, but it is accepted that he was a member of one of the original Tribes of Galway, a set of 14 merchant families who dominated both political and commercial life in the city.

Joyce did not learn his craft in Ireland; he learned it as a slave after being captured by Barbary pirates when he left his hometown of Galway for the West Indies. He had been travelling as an indentured servant, a widespread labour system at the time by which young emigrants paid for their passage to the new world by first working as a free labourer.

Barbary pirates were not uncommon in Irish waters. The history of the Sack of Baltimore tells of how the inhabitants of a sleepy Irish village were captured in the dead of night by a band of Algerian corsairs. The pirates bound an estimated 200 locals in irons and whisked them off to North Africa where they were sold as slaves.

Joyce was sold in Algiers to a wealthy Turkish goldsmith. Realising his slave was educated, the goldsmith took Joyce on as his apprentice from around 1676 to 1690, until he was released on the orders of William III.

The story goes that Joyce’s master was so impressed with his capabilities as a goldsmith that he offered the hand of one of his daughters in marriage – along with property – as an incentive to remain.

Joyce refused the offer and returned to Galway, where he started a business as a goldsmith, eventually buying the Rahoon estate in the city. Several pieces of his craftsmanship survive, most notably the St Prendergast Chalice in St Patrick’s College, Thurles, Co Tipperary. But his Claddagh rings are a rarity, which makes this piece bought by the museum a national treasure.

“Galway City Museum is delighted to bring the ring back to Galway City. It will be showcased in the new Atlantic Museum in 2022, where it will form part of the Atlantic People story in a gallery which will stand in the medieval walls close to the Spanish Arch and the Claddagh village,” said the museum’s collection officer Eoin O’Neill.

But, after more than 300 years, this little ring still poses many questions.

It bears two inscriptions –MRC and LcM – although the L is quite faded, and O’Neill is on a quest to ascertain who the original wearer was. “As marriage records only go back so far, it is a bit like trying to find a needle in a haystack when you only have the initials to work with.”

He also points out as these rings were often passed through the female line, the initials could also be those of a mother and her daughter, along with the fact that these rings were also given as tokens of friendship – so it may not necessarily have been a wedding ring.

O’Neill is the only member of the museum on site during the lockdown. “We have so many artefacts, especially of an organic nature such as old manuscripts and wood that need to have certain humidity, so they need constant monitoring.”

As guardian, he is there on his own in the 2,100sq m (22,600sq ft) museum surrounded by treasures dating back hundreds of years. He admits that while walking alone through the empty rooms and corridors he is often startled, especially when he “hears the sounds of human voices” before realising that “they are the automated voice sensors which tell the story of a particular piece”.

The museum will expand in 2022 to the far side of the old medieval walls at the Spanish Arch.

This is where this historic little ring, which went “from the shores of Galway to Algeria and back again with its stories of adventure, romance and legend”, will finally reside.

10 common instances of fatphobia, and how to react to them