Finding magic in the February garden 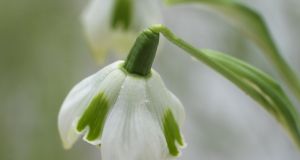 It’s funny how the arrival of spring so often takes us by surprise. Each day a few more precious minutes of daylight until nature’s pendulum silently swings, jolting plants into growth and catching us off guard. Admittedly, much of the early magic happens underground, far away from human eyes. But there are a handful of February/early March flowering plants which herald the beginning of another new growing season in more obvious ways, bringing scent and colour to our gardens at a time of year when both we and early-emerging pollinating insects need them most.

True, for those of us with small gardens, finding space for these ultra early-flowering species can be challenging but there are clever ways around this.

Let’s start with bulbous plants, most of which are perfect for even tiny gardens and/or containers including stone troughs and window-boxes as long as you give them a good quality, John-Innes based compost and add horticultural grit for sharp drainage (at a rough ratio of 2 compost to 1 grit). Examples include reticulate irises, Scilla mischtschenkoana ‘Tubergeniana’ and very early-flowering, hardy daffodils such as Narcissus ‘February Gold’, N. ‘Rijnveld’s Early Sensation’ (also known as ‘January Gold’) and N. ‘Spring Dawn’, all of which are typically in bloom in February.

While it’s far too late to plant these bulbs (autumn is best), at this time of year you can find them as container-grown plants in bud/ flower in good Irish garden centres. Many of these dainty, late winter/ early spring-flowering bulbous plants are also ideal for tucking under the skirts of deciduous trees and shrubs, a really space-efficient way to grow them in gardens where space is at a premium. Examples include Crocus tommasinianus, chionodoxa, snowdrops (Galanthus), winter aconites (Eranthis hyemalis) and Cyclamen coum, all of which will slowly self-seed over time to form generous flowering clumps.

Many of the loveliest, earliest flowering perennials are also happy to grow in light shade beneath eciduous trees and shrubs as long as the soil doesn’t get too hot and dry in summer. Examples include the ultra-reliable primrose, Primula ‘Wanda’ (wine-coloured flowers), the semi-evergreen, silver-leafed pulmonaria, P. ‘Diana Clare’, the silver-leafed, floriferous Brunnera ‘Looking Glass’ and any of the countless varieties of the highly ornamental, semi-evergreen Helleborus x hybridus, whose flowers come in a glorious range of fruity shades. All are eminently suitable for small gardens. So is the ultra-dainty, hardy herbaceous perennial Hacquetia epicactis, which produces its very decorative, long-lasting  yellow flowers (technically ‘bracts’) from January-March and reaches a height and spread of just 5-10cm.

What about suitable varieties of trees and shrubs? When it comes to choosing the best flowering shrubs for the February garden, the richly scented Daphne bholua  ‘Jacqueline Postill’ has long been considered a classic but grows into a large plant  (height and spread of 3-4m), making it a bad choice for a small garden where growing space is at a premium. Instead, seek out the evergreen Daphne ‘Perfume Princess’, an outstanding new variety that produces its clusters of large, deeply-perfumed flowers in profusion from January-March and only reaches a height and spread of 1m-1.5m.

Remember, too, that more compact species of late-winter/early spring flowering shrubs and even trees will grow quite happily in a large pot or tub as long as they’re kept fed and watered. Examples include the evergreen Sarcococca humilis ‘Winter Gem’, whose small, pale flowers pack a powerfully perfumed punch and the hardy Japanese apricot, Prunus mume ‘Beni Chidori’, which reaches a height and spread of just 2m-2-5m and whose sherbet-pink blossom brings a splash of brilliant colour to the garden in February-March.

As for any of the larger-growing shrubby species that flower at this time of year, the conventional wisdom is that these are suitable only for big gardens. Not true, or at least not always true… In fact many can be trained to grow against a wall (in much the same way as fruit trees), their size and growth habit controlled with an annual pruning soon after they’ve finished flowering.  Examples of shrubs that can be treated this way include witch-hazels, whose delicate, deliciously scented spidery flowers are one of the most charming of late winter/ early spring blooms. Another is the hardy, deciduous white forsythia (look out for the variety Abeliophyllum distichum ‘Roseum’) , whose intensely perfumed flowers appear on the plant’s bare stems from February-March. A third is the shade and acid-loving Stachyurus praecox, whose very decorative, dangling racemes of pale, bell-shaped flowers appear on the plant’s bare branches from February to April. A fourth is wintersweet (Chimonanthus praecox), whose waxy, yellow, spicy-scented flowers are one of the joys of the late winter/ early spring garden.

Climbers, of course, are also ideal for growing against a wall, around a doorway or over an arch, pergola or gazebo. Just bear in mind that while there are several different late winter/ very early spring flowering types of clematis, all are borderline hardy and will not survive in exposed gardens or colder parts of the country. But if you can give it a sunny, sheltered spot and protection from harsh winters/ severe frosts, then the evergreen Clematis cirrhosa var balearica (commonly known as the fern-leaved clematis) will reward you with its delicately freckled, scented flowers, which appear from December-February. There’s also a very pretty, white-flowering form known as ‘Wisley Cream’ while the newly introduced, evergreen Clematis ‘Advent Bells’ blooms from December to February. All require a fertile, free-draining soil in full sun or light shade and will slowly reach a height and spread of 2-3m x 4-5 m if left unchecked but can be kept more compact if pruned immediately after flowering.

It goes without saying, of course, that almost all of these plants also make fine cut-flowers to place in a vase indoors and enjoy on those dark, late winter days when it feels like spring will never come.

The hectic rush that marks the start of a new growing season isn’t very far away so take advantage of any dry days in the coming weeks to clear, weed, rake and prep beds, hoe paths, sort out seeds/seed and tuber orders, and get in fresh supplies of seed, compost, labels etc. If you have a glasshouse or polytunnel, then it’s also  good idea to give it a proper tidy and wash down at this time of year.

This is a good time of the year to move young deciduous trees and shrubs while they’re still in winter hibernation. Just make sure to dig and prepare the planting hole first (leave plenty of room for the rootball), and to water the plant generously both before and immediately after planting. Bear in mind that plants moved in this way will also need to be watered during any prolonged dry periods for up to a year after being transplanted.

Get a ticket to this year’s Garden & Landscape Design Seminar, ‘Seeds of Change: Planting Design for the 21st Century’, which takes place on Saturday, February 29th at the Crowne Plaza Hotel, Santry, Dublin 9. Sustainable garden and landscape design is the theme of this year’s event , which will feature a host of guest speakers include Nigel Dunnett, Cassian Schmidt, Sandro Cafolla and Sarah Price.