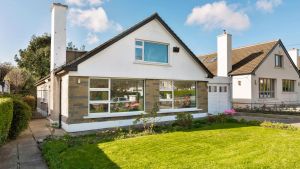 Houses in Cherrygarth, a development of nearly 60 detached dormer bungalows built in the early 1960s in Mount Merrion, Co Dublin, by developer PV Doyle, command high prices, whatever their condition. Sherry FitzGerald, the agent for 24 Cherrygarth, a five-/six-bed house with an asking price of €800,000, estimates that it would cost  from €100,000 upwards to renovate and perhaps extend it. And it already has a bid of €830,000.

Number 24 is a 193sq m (2,077sq ft) detached house on a good-sized garden near the end of the Cherrygarth cul-de-sac. The late Donal Foley, Irish Times news editor and his family moved there in 1967. His wife Patricia Foley died last year aged 99 and so more than 50 years on, the family home is being sold. It was rewired 10 years ago, according to their daughter Deirdre Morrissey, but otherwise “needs everything doing to it”.

The front door – at the side of the house – opens into a porch with a framed news page of tributes to Donal Foley, who died in 1981, from people including Jack Lynch, Charles Haughey and colleagues Maeve Binchy and Nuala O’Faolain.

It opens into a wide hall and then into a livingroom/diningroom stretching the width of the house at the front. A serving hatch from the kitchen to the diningroom always draws attention, says agent Rosa Egan. The rest of the downstairs accommodation is off a hall running to the rear of the house: there’s a kitchen/breakfastroom on the right, an office/single bedroom on the left and three more bedrooms – two looking on to the back garden – and a family bathroom. It’s likely that a revamp would involve reconfiguring the rooms and extending at the back.

A very steep flight of open-tread stairs leads from the entrance hall to the under-eaves upstairs bedrooms, one at the front, one at the back, with a wide landing separating them. Under-eaves storage runs from the front to the back of the house on both sides.

The good-sized lawned back garden has been well tended and, sheltered by mature trees and bushes, is very private. A short cut at the end of the cul-de-sac leads to Lower Kilmacud Road, a walk of under five minutes.

Number 24 is unlikely to be disturbed by development in the area because of its location. Oak View Property, headed by PV Doyle’s nephew Stewart, has permission to build 42 homes – a mix of apartments and houses – on 3.44 acres around Thornhill House, near the junction with Trees Road and Cherrygarth. Thornhill, a protected Georgian mansion and former home of PV Doyle, will occupy a central position in the scheme.