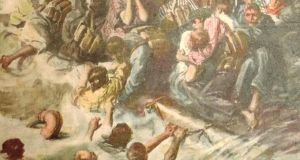 Rare images have come to light which recall a 1921 shipping disaster and multiple drownings off the Irish coast which almost scuppered the arrival of jazz music in Ireland.

In October 1921, just months after the War of Independence, the London-based Southern Syncopated Orchestra was scheduled to play a series of highly anticipated concerts at the La Scala theatre, just off O’Connell Street in Dublin.

The band, numbering over 40 members, was made up of black musicians and singers mainly from the southern United States and the West Indies. They had been touring Scotland and departed from Glasgow on Saturday night, October 8th, on board a ferry, the SS Rowan bound for Dublin.

Shortly after midnight, the ship was sunk in a bizarre accident after being struck, within 10 minutes, by two other vessels in fog-bound seas off Corsewall Point. Of the estimated 90 people on board, 25 passengers and 11 crew members were drowned. Precise records do not exist but it is believed that eight or nine of the victims were members of the orchestra.

The first report in The Irish Times on October 10th, 1921, mourned the loss of lives “including a considerable number of the members of a negro orchestra which was to have opened an engagement today in Dublin”.

The illustrator, Achille Beltrame, either used artistic licence or based his drawing on inaccurate news reports. There is no record – as he illustrated – of a “Miss Mincester” standing on a life raft comforting survivors by singing hymns.

Among those who drowned were the band’s drummer Peter Robinson. The ship’s captain Donald Brown went down with his ship, as did “two Dublin cattlemen returning from a trip to Scotland . . . T Duff of Seville Place Cottages and J Cullen of West Rd, North Wall”.

Despite the disaster, the orchestra quickly regrouped and, after attending the funerals of their drowned colleagues in London, and getting new instruments to replace those lost, travelled to Dublin.

They played a two-week engagement at the La Scala later that month to public acclaim, before going on to play at venues in Derry and Belfast.

Newsreel footage (iti.ms/1v CagLi) of some of the band members who survived the shipwreck arriving in Dublin Port later in October 1921 has turned up in the archives of British Pathé – formerly known as Pathé News – which made news “bulletins” that were shown in cinemas in the pre-television era.

Following the Dublin concerts, jazz became increasingly popular in Ireland but was eventually denounced by the Catholic Church and the Gaelic League as immoral and the music of “savages”.