Other works include paintings by Daniel O’Neill and Harry Kernoff 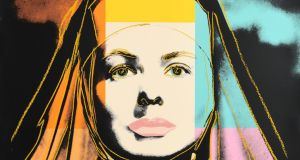 Though better known for his Campbell Soup paintings, king of pop art Andy Warhol also produced silkscreen portraits of 10 famous athletes, which are now among the artist’s best-known works.

The forthcoming Morgan O’Driscoll Irish and International online sale, which ends on October 27th, features a well-known Warhol work: a portfolio of four screen-prints, signed and numbered 8, from an edition of 150, of Muhammad Ali which were printed by Rupert Jasen Smith in New York in 1978 (€200,000–€300,000).

Born Cassius Clay, the boxer, activist and philanthropist changed his name to Muhammad Ali when he converted to Idlsm in 1964. He is widely regarded as one of the most significant and celebrated figures of the 20th century, as well as one of the greatest boxers of all time.

He discovered that his grandfather, Abe Grady hailed from Co Clare, and when he came to Ireland in 1972 to fight Alvin ‘Blue’ Lewis at Croke Park, the Irish Tourist Board pulled a major coup by getting the world’s most marketable sports star to film an advert promoting Ireland. (Look for it on YouTube.)

Warhol himself – who was a leading figure in the visual art movement, and who The Economist, in 2009 described as “a bellwether of the art market” – was also no stranger to the occasional fight. In 1968, radical feminist Valerie Solanas shot the artist. .

Also in there is Morons by urban artist Banksy, whose prices have seen a steady increase since his dystopian view of the House of Commons achieved €11.1m last year. Signed “Banksy 07”, the coloured screenprint is listed at €20,000–€30,000.

The two Harry Kernoff’s in the sale are a good indication that not all paintings by an artist are equal in terms of cost, medium and from a critical viewpoint.