No 19 Eglinton Wood has the benefit of acres of space, privacy and an abundance of light 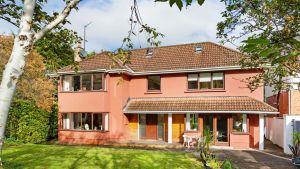 There are many beautiful and beguiling homes for sale in Donnybrook, Dublin 4. While number 19 Eglinton Wood, a 1980s-built block of a property, may not be as photogenic as some of its more prominent counterparts it has the benefit of acres of space, privacy and an abundance of light.

The detached house, which is secreted off Eglinton Road along a sylvan lane, was the home of former city architect Jim Barrett, who died two years ago and whose legacy includes the Liffey Boardwalk, the Spire in O’Connell Street and the restoration of City Hall.

Before that he was Limerick city architect before he and wife, Carmel Brennan, moved to Dublin in 1994. Like many architects’ homes the property is modest in looks, especially when compared with the fancy flourishes of the stately period homes on the nearby streets.

Set on a third of an acre, the property is hidden from view behind gates and has a large front lawn that faces due south. The boundary walls are those of an original orchard, and the lawn is in no way overlooked. As well as being really private it also gets east and west light, qualities that appealed to the couple.

Set over two floors the 198sq m/2,121sq ft four-bed was built in the orchard of number 56 Eglinton Road, and indeed a mature pear tree still hangs over the adjoining wall.

The main door opens into a wide and welcoming double-height hall, but Brennan prefers to use the glass doors that open out from the kitchen to a patio. The kitchen is very much as it was when she and Barrett first moved to Dublin, with a 1980s sensibility and a peninsula instead of an island. Off the kitchen is a playroom that leads through to a utility with side-door access.

Across the hall the living room has a lovely sense of balance, with the shape of the box bay window to the front echoed in the double doors that lead through to the dining room, where there is direct access to the garden.

There is garden and greenery on three sides of the house, with lots of scope to extend for anyone seeking more space.

Upstairs there is a galleried landing with three bedrooms to the right and the main bedroom across the way overlooking the front garden with a sizeable en suite bathroom.

This is a home where there is already plenty of space, including wall space for hanging art, something many modern glass boxes do not allow. It has also reared the next generation of architect too, Séamus Bairéad of award-winning practice A2 Architects.

Buyers here are likely to want to update but there is already a good bone structure in place, a decent C3 Ber rating, and reception rooms and kitchen bathed in light from which to watch the seasons change. It is seeking €1.35 million through agent DNG.

The site’s size is also likely to make it attractive to prospective developers of infill sites. Eglinton Wood already features a small apartment block to the front along with a pair of coach houses and a pair of townhouses. Access to number 19 is past all of these.

The owner of number 19 has a right of way past the apartment block while the rest of the lane belongs to it, the other properties on the lane have a right of way through it.