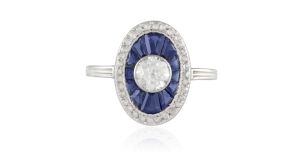 It will be all about colour and craftsmanship at the forthcoming Fine Jewellery and Watches sale at Adam’s on St Stephen’s Green sale on September 17th next, with rare items by the legendary Parisian jeweller Van Cleef and Arpels included among the offerings .

Van Cleef and Arpels’ stellar client list reads like a Who’s Who of both Hollywood and international royalty.

For Elizabeth Taylor, who amassed the most impressive jewellery collection of any Hollywood star, her assemblage, when sold at auction by Christie’s in New York achieved a jaw-dropping $115.9m.

The Elizabeth Taylor sale featured many pieces by Van Cleef and Arpels, including a ruby ring, which Richard Burton gave the actress for Christmas in 1968, after searching for four years “to find the most perfect ruby in the world ” and of which Taylor admitted that “she couldn’t stop screaming” when she opened its box.

Further testament to the actress’s love of the French jeweller was that on hearing she was about to become a grandmother for the first time, she and Burton went straight to the jewellery house, where they purchased a piece to mark the occasion.

The Adam’s sale includes a ring, earrings and necklace from the Alhambra collection, in addition to a private collection of bespoke pieces. Most notable is the set of sapphire, turquoise and diamonds in the form of a bracelet, earrings, brooch and ring.

“What makes these Van Cleef and Arpels pieces both important and collectable, is the quality of the craftsmanship and the condition of the high-quality Persian turquoise” according to Claire-Laurence Mestrallet of Adam’s.

Cartier was another favourite of Taylor’s, and the French luxury house also features in a selection of bracelets and rings, along with Santos and Panthere watches.

New and modern pieces by Margherita Burgener, the Italian jewellery designer who only sells through auction houses, include a fabulous pair of sapphire and titanium earrings (€5,000–€6,000) and a tourmaline diamond and titanium ring in the shape of a flower (€1,800–€2,200)

For those seeking a knuckle duster, the pearl and diamond ring (€2,500–€3,000) is so large it may need a safety warning while being worn, while the early 20th century amethyst ring, has a special band at the back, which opens so it will fit over the largest of finger joints.

For men, along with a selection of watches and cufflinks, there is very unusual gold and enamel celestial money clip (€800–€1,000)

Elizabeth Taylor claimed that when she was born her eyes did not open for eight days, but when they did the first thing she saw was an engagement ring remarking, “I was hooked”. She certainly was. The sale of her jewels set a world record for a private jewellery collection.

Ross O’Carroll-Kelly: ‘Sold to the man in the Ireland jersey with a bowtie tied around his neck!’
4

A new way to make fishcakes that is quick, easy and delicious
9

‘I wrote a part for my husband. By the time filming was over, so was our marriage’
10