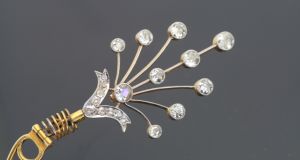 Shagreen, the granular material often mistaken for leather, but actually the untanned skin of sharks and stingrays, has lent its subtle beauty to toiletry sets, weapons and reading-glass cases.

Used for millennia by the Japanese on scabbards and handles for swords as it allowed samurai warriors a tight grip on their daggers, it was also used to cover telescopes and as sandpaper by sailors.

The art deco period saw a revival of the use of shagreen, with its otherworldly green hue, but this was limited to high-end furniture.

Today, its uses vary from a medicinal patch to treat tuberous sclerosis to bespoke Rolls Royce interiors. The name derives from the French chagrin, as the abrasiveness of its texture led to the French meaning of anxiety or annoyance.

Le Peau de Chagrin, which translates as The Skin of Sorrow, was the novel which first established Honore de Balzac, with his tale about the magic skin and the excesses of the bourgeoisie.

It was the last book psychoanalyst Sigmund Freud read before he died from a lethal dose of morphine and it is suggested - though debated - that the influence for Oscar Wilde’s The Picture of Dorian Gray came from Balzac’s anecdote of the enigmatic shark skin.

At Timeless, the annual Irish antique dealers fair at the RDS in Dublin, which runs from September 13th-15th, Jonathan Swire, the UK-based dealer who specialises in antiques for contemporary settings, will exhibit a rare walnut art deco clock, with a shagreen face, showing its sea-green bubbled skin. Swire believes the piece was made by Waring and Gillow from 1925 (€ 9,500).

Also exhibiting at the fair is Peter Linden, one of Ireland’s experts on Persian carpets and antiquities, who has two important silk offerings in his collection.

These fabulous silk tapestries were woven by nomadic Uzbek women in preparation for marriage and were only to be displayed during the wedding week either as a bedspread or a wall hanging. The piece is of a particularly rare group from the Zarafshan valley in Uzbekistan, according to Linden.

What is significant about suzanis, handwoven along the Silk Road, is the workmanship, rarity and dyes used.

While today we take colour for granted, to source the pigments used in these handmade pieces took time, effort and in the case of red – quite a lot of insects.

The colour Indigo, literally “from India” was used for blue. It was banned in England and France in the 1600s, when the French government went so far as to impose a death penalty for its use, due to the fact that it was a foreign import, with the Germans referring to it as the “devil’s colour”. But in the 1900s, unscrupulous British planters in India forced farmers into contracts where they were made to grow indigo plants instead of much-needed food, such was the demand for the dye.

For reds, spare a thought for the 70,000 cochineal insects required to produce one pound of the colour used to dye these threads, along with the madder root, which can result in birth defects and miscarriage due to its toxicity. For remaining hues, saffron from the wild crocus was used for yellows and pomegranate skins or pistachio galls with iron were used for black.

In addition to these rare pieces, the fair will showcase some of Ireland’s foremost antique jewellery dealers.

John Weldon has a stunning diamond aigrette hairpiece, though the threaded tip which allows the piece to be used as a pendant will probably see the piece get more wear (€4,500).

John Farrington’s stand features engagement rings from one to four carats, a Chaumet diamond necklace, Boucheron brooches, a five-carat diamond pendant and colourful jewellery to include aquamarine, peridot, tourmaline and sapphires along with a large selection of necklaces and pearls.

Niall Mullen, who specialises in art deco has a great a selection epitomising the roaring 20s on his stand, and The Vintage Hub has everything from New York Loft to Scandinavian design styles. As always, Michael Connell’s stand will be great for a bit of banter and collectables.

The Office of Public Works (OPW) Heritage Services will be on hand to discuss their latest restorations, that of Doneraile and Emo Courts, along with The Georgian Society who can advise on Ireland’s architectural and decorative arts heritage.

There are over 30 exhibitors at the event, which covers everything from art, antiques, contemporary pieces and jewels, to handwoven silks dyed with insects.

Entry is €10, but complimentary tickets are available on the website. Seetimelessantiquesfair.ie

Don’t preheat the oven, and 24 other ways to save the planet from home
10