The multimillion dollar question: is modern art worth it? 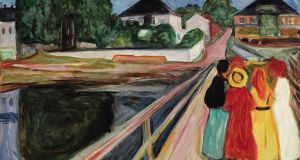 The big international auction houses are finalising plans for their end-of-year art auctions but 2016 prices seem unlikely to break any records.

In 2015, Christie’s sold Pablo Picasso’s 1955 painting Les Femmes d’Alger (Version “O”), from his series known in English as The Women of Algiers, for $179.4 million (about €158 million at the then prevailing exchange rate) and its status as the most expensive painting – or any work of art – ever sold at auction is unlikely to be toppled this season.

The top lot in the forthcoming sales is a painting, dating from 1902, entitled Pikene på broen (Girls on the Bridge, above) by Norwegian artist Edvard Munch. It is estimated that it will achieve more than the (comparatively modest) $50 million when it goes under the hammer at Sotheby’s auction of impressionist, modern and contemporary art in New York on November 14th.

Pikene på broen has proved to be a fantastic investment for its unnamed owners over the past 20 years. It first appeared at auction – also at Sotheby’s in New York in 1996 – when it sold for $7.7 million, a record price for the artist. Just 12 years later, the painting was back at Sotheby’s in 2008 and sold for $30.8 million.

Since then, of course, Sotheby’s has auctioned one of four versions of Munch’s most famous painting, The Scream, which sold for $119.9 million.

Munch died in Oslo in 1944 and, according to Sotheby’s, his “importance to the full breadth of 20th century art cannot be overstated” and Girls on the Bridge “continues Munch’s exploration of the themes of both sexual awakening and mortality. The image of a cluster of young women, huddled in a secretive mass between two points of land, resonates with explosive tension.”

Christie’s says “Abstraktes Bild is the second canvas in Richter’s monumental four-part series of works created in 1994” and describes the painting as “a superlative example of the artist’s celebrated abstraction, it is a dazzling, prismatic explosion of opulent jewelled tones”.

The vendor is described by the auction house as “rock legend Eric Clapton”. Bloomberg has reported that in 2001, Clapton paid $3.4 million for a group of three 7ft tall abstract Richter paintings but has already “sold the two other works, in 2012 and 2013, for a combined $55.2 million”. So this third painting, if sold within estimate, “could push his total above $70 million – or more than 20 times what he paid” which, Christie’s acknowledges, would be “an amazing return in 15 years”.

Also at Christie’s is another major piece of abstract art, this time by Dutch-born American artist Willem de Kooning. It has an “estimate on request” believed to be about $40 million.

Christie’s says the painting, dating from 1977 by the artist who died in 1997, was “inspired by the watery landscapes near his home in Springs, Long Island”.

“Somehow rooted in nature yet seemingly devoid of any figurative form, the painting articulates a landscape brought alive with a sense of the human through the length, scale, form and emotive power of de Kooning’s vigorous brushwork,” the auction house says.

Untitled XXV last appeared at auction 10 years ago – also at Christie’s in New York – when it sold for $27.1 million.