Shock of the nude? Adam’s Irish Art sale majors in the human form

The sales feature a selection of nude styles, from the stark anatomical realism of John Luke’s Nude Male to Louis le Brocquy’s subtle Being 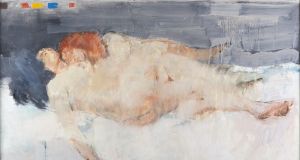 Mankind has long been fascinated by the naked human body expressed as an art form. A refection of ourselves, and sometimes conveying social and political nuances, the nude has always been an essential component of art education.

Though depicted as a form of weakness in early art – it was the Greeks who first portrayed the nude as heroic and expressing moral virtue through naked statues of their gods.

Ireland’s ’ stone motifs of Sheela-na-Gigs – naked women with enlarged genitalia and drooping breasts found on Christian churches and castles dating from the 12th century are also testament to our history of expressing the naked female form.  Ireland has greatest number of these curiosities – with a similar number of theories to support their original purpose.

Despite the strict censorship laws in the early 20th century banning the sale of books now considered part of our cultural heritage, nude paintings, with a few exceptions, never appear to have attracted the same moral outcry as our literature.

Even back as far as 1800, Hugh Douglas Hamilton’s Cupid and Psyche in the Nuptial Bower was hailed as “the most perfect picture ever produced in this country” despite this nude being painted in the Victorian era, when morals and sensuality were scrubbed clean through social regulations.

Harry Clarke’s window of a semi-clad woman commissioned for the League of Nations in Geneva in the 1920s was considered too scandalous to represent Ireland at the time – showing that what some consider art, others deem to be on the cusp of pornography. The window now hangs in the Hugh Lane Gallery.

David Lilburn’s provocative print From the Forceps to the Chains of Office – created for the 1984 EVA exhibition in Limerick – caused a stir when a local businessman took offence and damaged the work. The fact that he had alerted local newspaper the Limerick Leader to his intentions – meant his protest backfired as he generated quite a bit of publicity for the print.

One of the highlights of the sale is The Lovers After Courbet by Basil Blackshaw (€20,000-€40,000), an oil on canvas depicting two women in an intimate tryst, inspired by Courbet’s The Sleepers.

Blackshaw was definitive in his approach to nudes: “I want to avoid the association with the subject” and “when I paint a nude I don’t want them to see a girl thinking or sitting, I want it to be just a figure”.

For Roderic O’ Connor, it was the complete opposite. He fell in love with his young model Renee Honta, eventually marrying her and settling in a small village in rural France. Two charcoal on paper drawings – Nude Study Seated and Nude Study Reclined – which Honta bequeathed to her maid, also feature (€800-€1,200).

The announcement last week that Sotheby’s in New York is to auction an impressionist painting of haystacks, Claude Monet’s Meules (1890), in May set the art world in a flurry. The painting is expected to achieve a whopping $55 million (€48 million) as so few of his works are in private collections.

What’s happening with our seaweed and why should we care?
Real news has value SUBSCRIBE