Sale of the centuries in Tipperary mansion

From a Hermes scarf to Queen Anne furniture, everything is for sale at Lissanisky 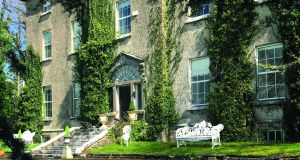 In the peaceful countryside of north Tipperary stands Lissanisky House, its imposing five-bay facade turned towards the Silvermines mountains. Home to the Sheahan family of Nenagh for several generations, the three-storey over basement Georgian country house is to be sold, and its contents are being auctioned by Sheppard’s this week.

Despite the solidity of its cut-stone entrance and the impressive fanlight above the hall door, the early history of the house has been swallowed up in the mists of time. The land once belonged to the Hon Otway Fortescue Toler, a younger brother of the third earl of Norbury and a descendant of John Toler, the “hanging judge” who tried Robert Emmet. In 1837 the house was occupied by an R Smithwick, who was probably connected to the Kilkenny brewing family.

“What we do know is that at one time it belonged to Napoleon’s physician,” says Philip Sheppard. Born in Blackrock, Co Dublin in 1770, Barry O’Meara was a navy surgeon who was serving on the Bellerophon when Napoleon surrendered after the Battle of Waterloo. The doctor’s professional and linguistic skills impressed the ex-emperor, who requested that O’Meara accompany him into exile on St Helena.

O’Meara became friends with his irascible charge and was the only doctor ever to have operated on Napoleon when, in 1817, he removed one of the statesman’s wisdom teeth. On his return to London O’Meara spoke out about the harsh conditions in which Napoleon was being held. This brought him into conflict with the British admiralty and led, eventually, to his dismissal from the navy. Undaunted, O’Meara rented rooms in London, hung the wisdom tooth on the window and set up shop as a dentist.

When Napoleon died, in 1821, O’Meara published his diaries from St Helena. They became an instant best-seller, turning their author into a celebrity and star of the after-dinner speaking circuit.

O’Meara’s son was also a doctor, and his grandson, Frank O’Meara, was an Impressionist artist. A young man of uncertain health, he produced relatively few paintings before he died at the age of just 35 – but one of his works is in the Lissanisky sale. Lot 62, West Brittany: A Coastal Relief, signed and dated 1882, has an estimate of €3,000-€5,000.

Anyone who loves whippets will find many, many incarnations of their slender forms in ceramic and bronze. Then again, the catalogue for the Lissanisky sale lists pretty much every kind of object you could imagine, from a Hermes silk scarf (Lot 714, €200-€300), to an Aboriginal boomerang (Lot 450, €80-€120).  And the house itself, with its quiet outbuildings and nine bedrooms offering glorious views of the Silvermines, is well worth a look. A 90-minute drive from Dublin, it’s easily accessible from the N7.

Previews begin today and continue until Monday. This may be a “typical” Irish country-house sale but such sales are, according to Philip Sheppard, becoming rarer and rarer events in the auctions calendar: we should treasure them while we can.

I can hear the old dear’s hysterical voice going, ‘Better men than you have eaten my one-pot stews!’
8