Rare items and lots of learning in Adam’s library sale 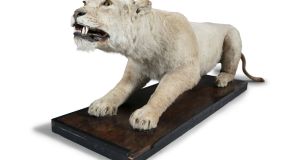 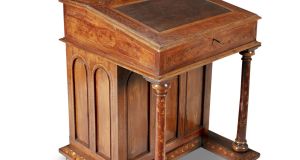 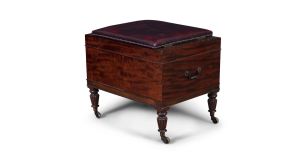 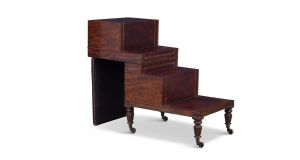 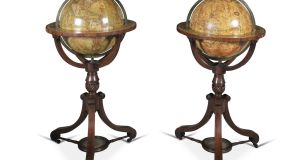 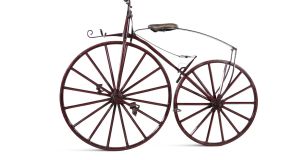 Old libraries are a little like time machines - where ghosts of the past reside. A shelter for collectibles, and an expression of our passion for antiquities, it is the one room in a house that embraces clutter, from dramatic bookcases heaving with leather-bound tomes to walls crammed with taxidermy, old maps and paintings.

Historically libraries within the grand houses showed the extent of a family’s disposable income as books were expensive items.

Today its functionality can be deemed to be that of a home office, but the allure of a home library is that of a peaceful refuge far removed from technology and plasma screens.

The upcoming sale The Irish Library at Adam’s on St Stephens Green, not only offers a wide selection of quality furniture from bookcases, library tables and an array of chairs, it also offers more unusual lots - which have graced the private reading rooms of period houses around the country.

An unusual offering is lot 169, a 19th century gout stool, its triple folding adjustment allowed sufferers of the disease some respite from the painful affliction associated with the excess of the aristocracy of the last century, and a far simpler relief than the one suggested by medical writer Lorenz Fries, who in 1518 proposed: “Roast a fat old goose and stuff with chopped kittens, lard, incense, wax and flour of rye. This must all be eaten, and the dripping applied to the painful joints” (€600-€1,000).

And while resting on the gout stool many Victorians would have engaged in game of lot 91 - The Mansion of Happiness, which historians claim was the first real children’s board game. The moral game was based on the puritan world view that Christian values and deeds were rewarded with success and happiness, and focused on high moral content rather than later games like Monopoly, which rewarded capitalism (€400-€600).

Lot 150 is a set of museum-worthy John Newton Celestial and Terrestrial Globes from 1838, on crafted mahogany legs. “It is not only the quality of the stands, but the calibre of the cartography and printing that makes these unique” according to James O’Halloran of Adam’s (€25,000-€35,000).

For library walls there is an array of architectural drawings, including lot 18 – Benjamin Wyatt’s plans for the Duke of Wellington’s house (€1,500-€2,500) and lot 21, a set of 10 hand painted gouache engravings of Raphael’s Loggia; the walls and ceilings commissioned by Pope Leo X for his private apartment in the Vatican (€4,000-€6,000).

Also included is a rare original GAA match ticket from November 21st, 1920, when Tipperary played Dublin. The date is remembered not for the game, but as one of the darkest days of the Troubles, that is of Bloody Sunday (€4,000-€5,000).

Cyclists will appreciate the title of lot 227, a Bone Shaker bicycle – called so because this 19th century model predated the comfort of pneumatic tyres (€3,000-€5,000)

Items in the sale will make interesting furnishings to other rooms too, but if you are fortunate enough to have a library at home, this sale will be of interest. For those that don’t, a trip to Marsh’s Library dating from the early 1700’s, and the oldest in Ireland is well worth a visit. See Adams.ie and marshlibrary.ie