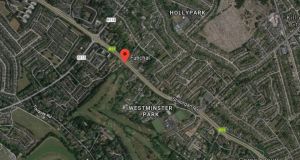 The 0.48 hectare site is located off the Stillorgan Road in Foxrock.

Kingscroft Developments will be hoping it’s fourth time lucky this time around, as it launches an appeal to get the green light to build a development of 28 apartments off the Stillorgan Road in Foxrock.

The developer, a subsidiary of Abbey plc, had its planning application for the site turned down for the third time in January of this year, and has now lodged an appeal with An Bord Pleanála. The planning authority is to due to make its decision by July 2nd.

It follows years of planning applications for the development of a 0.48 hectare site on the grounds of two derelict houses, Funchal and Garryknock, just off the N11, all of which have been rejected.

Back in 2015, the developer lodged a planning application for nine three-storey family homes on the site. However, its application was refused on the grounds that its density was not high enough. At just 32 units to the hectare, Dún Laoghaire-Rathdown council said it was a “wasteful” use of the land.

Subsequently, the developer tried again, upping its density with a plan to build 29 units in total, for a density of almost 58 units to the hectare. But this application was also turned down in late 2016, mainly, it seems, because it had intended that access to the development would be via the “heavily trafficked Stillorgan Road (N11)” and would therefore “endanger public safety by reason of traffic hazard”.

Then, last November, the developer went back to the drawing board submitting yet another application for the site. This time around, it wanted to demolish the two houses and build a four storey apartment building with 28 apartments, a mix of one-, two- and three-beds, on the site, having scrapped plans for houses altogether.

But the council also refused this application, on the grounds that it marked an “intensification” of the site use, while the redesigned access “gives rise to the generation of additional turning movements that introduce additional safety risks to road users”. The council also ruled that the apartment block would appear “overbearing” to neighbouring properties, “injurious” to the local residents and would depreciate the value of these properties.

The application attracted opposition from local residents. Councillor Cormac Devlin argued that the plans would present “a huge loss of privacy” for houses in the adjoining Avonmore estate, and also found fault with the proposed exit on to the N11, as well as the internal traffic management plan. A “real lack of quality and usable open space” was also an issue.

One resident expressed concern about the quality of the evening light in the back of her house and garden, arguing that a curtailment of the south-facing garden would “not only affect the value of my property but the quality of my life”.

If Kingscroft does ultimately get permission to develop the now derelict site, it will have taken a 15-year effort to build on it. Back in 2004, the then owners applied to build 14 properties on the site, before the Funchal Partnership acquired it looking to build four substantial detached houses. Kingscroft then bought the site for €1.75 million in 2014.

Meanwhile, directly across the road, the Granville Hall Partnership is progressing at pace with plans to build 143 build-to-rent apartments on a two-acre site. The developer submitted a pre-application for fast-track permission through An Bord Pleanála in January of this year, and earlier this month, the planning authority ruled that it is a suitable case for an application under the Strategic Housing Development scheme. Typically, once a developer passes this pre-application stage, a full application will follow soon after.

‘Sadly my marraige ended, but it was the kick I needed to start my own journey’
6