Check out this idyllic west Cork island escape for €830k

Upstairs there are four bedrooms, accessed via a waxed timber balustrade staircase leading up from the sitting room 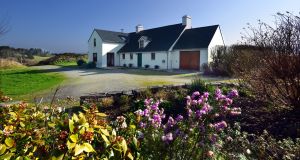 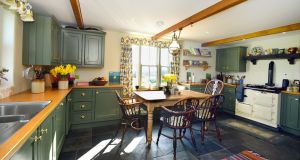 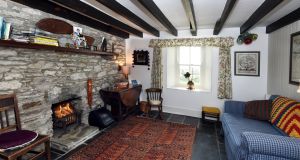 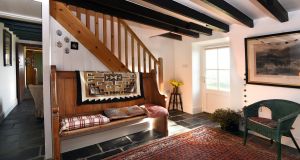 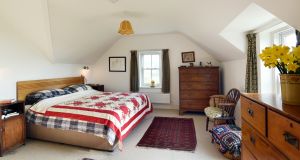 As the crow flies Denniff’s Cottage on Ringarogey island in Roaring Water Bay is just a few minutes’ boat ride to Baltimore, Co Cork. In contrast, the scenic route is by car, a journey time around the winding roads, of about 20 minutes.

The island, which is joined to the mainland by a stone bridge, part of famine relief work in the mid-19th century, is one of many in an archipelago that includes the better-known isles of Sherkin and Hare.

One of its owners, Pat McKnight, then Denniff, hence the name, bought it in 1974 when west Cork was beginning to flourish as an alternative location. Her parents had had a place in the cove in Baltimore since the 1950s. After a drink with estate agent Charles McCarthy in the Algiers Inn in Baltimore, her husband Tim McKnight recalls that locals couldn’t believe that she paid IR£14,500 for a farmhouse on a sprawling parcel of about 16 acres looking out across the estuary of the Ilen river to the islands of Sherkin and, on a clear day, Cape Clear.

The property, which dates back to the mid-19th century, is charming in every way. The back door, the one in daily use by its owners, is an old half-door and leads straight into the living room, one of the rooms in the original part of the house.

Here the beamed ceiling height is low, about 7.5ft. It has an inglenook fireplace set into a bare stone wall, where a wood-burning stove has been installed. Underfoot is a slate floor which was damp-proofed in 2010 as part of extensive works carried out by the owners.

The works included rebuilding the kitchen and interconnecting dining room, a gorgeous space with windows on three sides and leading out to a south-facing patio.

Upstairs there are four bedrooms, accessed via a waxed timber balustrade staircase leading up from the sitting room.

The main house extends to about 185sq m/2,000sq ft, and is seeking €830,000 through Charles McCarthy. The lands extend down to the sea where there is a small pontoon and mooring, includes several outhouses, one a potter’s studio which, subject to planning, could become a smart self-contained holiday rental. A second building is used as a boathouse.

Coincidentally. the Algiers Inn is also for sale, seeking around €350,000 through agent Cohalan Downing.