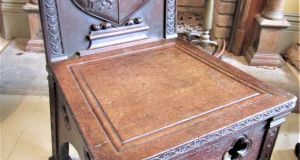 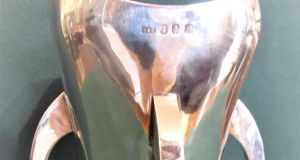 The mether – or madder – as it is also known, is an ancient cup with four sides and three to four handles, unique to Celtic cultures. The name is said to derive from “meth” the old Celtic word for mead. These were used as ceremonial vessels when visitors were welcomed in peace and friendship, at funerals, weddings and farming festivals.

One of the origins of the term honeymoon is said to be where a newlywed couple would drink mead – made from fermented honey – and a favourite with Celtic tribes, from a mether for the first month following their marriage as it was thought to be an aphrodisiac.

At formal ceremonies tradition was that the cup was first given to a guest, who imbibed and passed it on to the person to their right for luck. The cup has square edges so anyone who drank too quickly would spill the contents.

Early examples in various woods, such as crab apple, willow and sycamore have been discovered in Irish bogs dating from the 10th century, and the National Museum of Ireland has 124 in its collection. Larger vessels were also used to store butter and buttermilk when not in ceremonial use.

One of the items featured in the forthcoming Damien Matthews sale in Kells (February 14th and 15th) and what the auctioneer terms “as a very important piece of Irish silver” is a mether cup dating from 1908.

The cup was made by Dublin silversmiths Hopkins & Hopkins, who were also commissioned to make the Sam Maguire Cup, the trophy for the senior All-Ireland football championship. Coincidently, the Liam MacCarthy Cup, for the senior hurling championship, is based on the design of a mether.

Besides it measuring an impressive 30cm in height, the design of this mether appears to be ahead of its time. It has a futuristic appearance but predates the futurist artistic movement in Europe by a year, and the art deco movement by over a decade leading Damien Matthews to describe the piece as “an Irish modernist masterpiece” (€1,500-€2,500).

A further item of interest listed in the two-day sale’s 1,000 lots is an early hall chair with a family connection to playwright, poet and political figure William Congreve. Known for his satirical plays, Congreve was born in 1670 and educated at Kilkenny College, where he met Jonathan Swift, and later Trinity College. His works include The Old Bachelor, Love for Love and The Mourning Bride.

Quite apart from its early date – it was listed in the Congreve family inheritance at Aldermaston Manor in Berkshire in 1752 – as an aesthetic object, it ticks many boxes with finely carved heraldic family crests, early Gothic insignia and its original condition.

A set of these rare 18th-century oak chairs were made for Col Ralph Congreve of Aldermaston Manor and feature coats of arms from the Congreve, Achard and de la Mare families.

A pair of these exact chairs from the same hall suite recently sold through English antique dealer Patrick Moorhead for £5,800 (€8,600). The estimate for the chair at Matthews’ auction is €500-€800. matthewsauctionrooms.com

Easy soda bread for the ultimate cheese on toast
6